In an interview soon to be posted on Sleaze Roxx, Spread Eagle bassist Rob De Luca was asked whether he blamed the grunge era for the demise of Spread Eagle back in 1995. 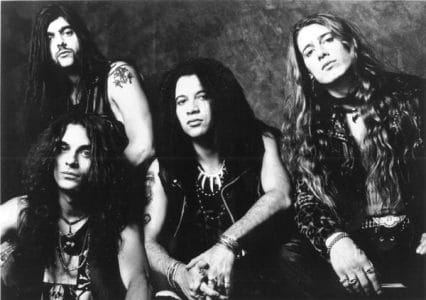 De Luca indicated: “Well, I like all kinds of music. There’s a ton of grunge music that I love so I don’t blame good music for anything. I do blame the cultural reaction to grunge, which I felt was ridiculous. It made people act like, if you’re not in a grunge band, you suck or if you’re not in a grunge band, you’re not cool. And I thought that was insane actually. I just couldn’t — I still cannot wrap my head around that kind of close-mindedness where style is more important than quality. And I think that history happens and you look back, may it be music history, cultural history, style history, political history — you look back at all the mistakes and you try not to make them again. I think that was a huge mistake and it would be horrible if it were to happen again. Not to me but to anyone. If you’re making great music, you should be seen for what it is and not if you’re not dressed like this guy, it doesn’t mean that you’re not cool. That’s what freaked me out and yeah, that kind of reaction hurt Spread Eagle bad. It absolutely hurt us really bad. It wasn’t the only thing but it was a factor in a perfect storm that pretty much took us out of commission.”

Spread Eagle are now back in action though as they released their critically acclaimed new studio album Subway To The Stars via Frontiers Music Srl last year. Stay tuned for the complete interview with Rob De Luca on Sleaze Roxx.

Spread Eagle‘s “Sound of Speed” (from Subway To The Stars album):