In terms of his recollection of early Guns N’ Roses gigs, Gardner indicated: “I don’t know them in succession, I’m bad with timelines, but I know we did a place called Dancing Waters and that’s out in San Pedro or Long Beach or something like that. 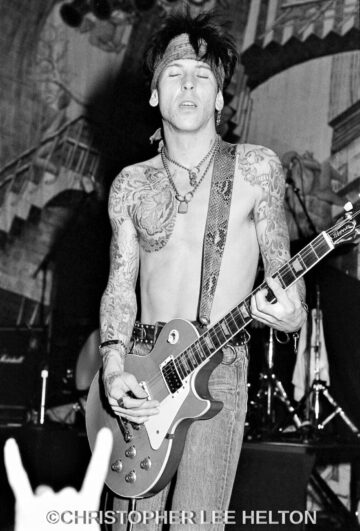 So, that was a little bit out of our realm of Hollywood — it’s only like an hour south of L.A. — but still, it’s just out of our usual area. Then we did another place in Glendora called The Timbers. And that’s the same thing, about another hour out of town. The Hollywood scene was so saturated, so we just started branching out to the outskirts a little bit. Then we did shows at The Troubadour. With the name Guns N’ Roses, me and Tracii did about five or six shows with them, and then we both left.”

With respect to the pivotal merging of members from Hollywood Rose and L.A. Guns that led to Guns N’ Roses, Gardner stated (with slight edits):

“So, Axl was singing for L.A. Guns, and then Izzy came in. Then our bass player from L.A. Guns kinda wasn’t working out, so Izzy suggested Duff [McKagan]. That transition was really already taking place and we had thought, I think Izzy had come up with the name, and said, “Hey, that’s perfect! Hollywood Rose – L.A. Guns – Guns N’ Roses!” So, we all obviously thought that was cool. But for me and Tracii, on the other hand, we got our bass player replaced with Duff – which isn’t a bad thing because Duff is a great guy and he’s a great player. [Duff] had more of an image and kind of just fit our style better. Ole [Beich] was much more of a heavy metal player.

That being said, the whole name change came around. You know, me, Tracii, and Raz had worked so hard and put all this money into that name and really had a buzz going and everything. And it was like, “Well, why change that? It’s kind of a risk to change it.” Like all of the sudden, that whole L.A. Guns thing just disappeared into thin air, and now it’s Guns N’ Roses; which kind of happens all the time in music, I get it. But when you have something going and it was your baby, and then all of the sudden you have two more big influences that are trying to take more control and change the name and change the members. So, me and Tracii were a little bit like – not that we didn’t like it because it was cool and it was working – I think there just was that whole control factor I think that kind of got overtaken. So, for me and Tracii, I think it was a little more bitter. There weren’t any big fights or anything, I’m just saying that I think we were both in the back of our minds like, “What’s going on?” Then the drugs really started.

Me and Tracii may have smoked some pot here and then, you know, drank and stuff, but we never did heavy drugs like that really at that time. So, some of the other heavier drugs got introduced and we were seeing the effects of that, too, within the band and we were losing control of everything. I mean, we were doing shows and stuff and the shows were good and what have you, we were getting a little buzz and things like that, but then the Hell Tour thing came up. They wanted to go all the way up to Seattle and then work our way back down to Portland, San Francisco, blah, blah, blah. But the vehicle we had just was not gonna make it. I mean, I was thinking, “If this thing breaks down, what are we gonna do?” We were all broke; we didn’t really have any money. Raz had the money, but he ducked out. He was like, “If you guys are gonna change the name and do all this shit, then I’m outta here.” So, we lost him; we didn’t have any financial backing.

So, Tracii decided not to go. I thought it was the other way around; I thought I ducked out of that tour first and then he ducked out after me like a week later or something like that. But my friend Marc Canter told me it was the other way around; he said, “Tracii ducked out first and then you followed him and said, “Nah, I’m outta here, too. I’m done.” That’s when we pulled out and then they basically immediately replaced us with Slash and Steven. And the rest is history.”

You can read the rest of the interview with Rob Gardner at Vinyl Writer Music‘s website.