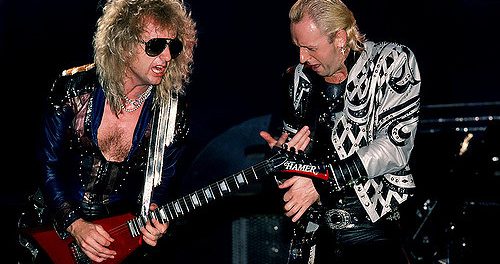 Judas Priest frontman Rob Halford was recently interviewed by the website Radio and looked back on the group’s Turbo album released back in 1986. 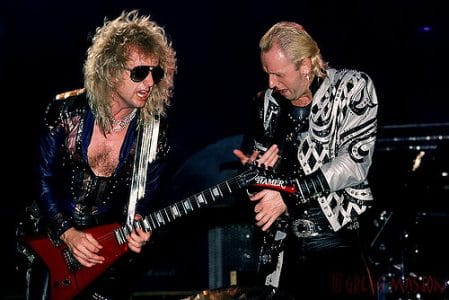 Halford was asked of the song “Parental Guidance” was almost quaint now to which he replied: “It is almost quaint now, but it was relevant at the time. But I think it was important that we pushed back a little bit with what we were being subjected to. “We don’t need parental guidance,” that was about as angry as we got, in terms of tone. It was kind of a bitch-slap, but even then, it was kind of lukewarm, in terms of a statement. It’s not an album filled with f—ing blood and guts and thunder. It’s a feel-good album, it’s almost a party album.”

In terms of what was behind the Judas Priest band members changing their look, Halford stated in part: “You do what you do at the time you do it: it could be because you just to shake things up a bit in your own band, or because you’re surrounded by all these other things that are going on around you, and you want to step into that arena and have some fun… yeah, we went towards a different look. Only for that one album! I think the visual image married perfectly to the sound of the album. The way we looked for Painkiller was perfect for that album; you try and wrap it all up in one presentation that is inclusive of everything that’s going on around you.”

You can read the rest of the interview at Radio.

Sleaze Roxx stated the following in its review of Turbo 30 (Remastered 30th Anniversary Edition): “Judas Priest’s Turbo has synthesized guitars all over it (and likely all drum machines) — pulsating ‘dance beats.’ Turbo depicts what was going on in hard rock music at the time. That same year, Iron Maiden toyed with guitar synthesizers on Somewhere In Time and they too were criticized; however not to the extent as Priest as they were pandering to a ‘hair band’ or ‘glam’ audience.”

‘Parental Guidance’ as featured on Turbo 30, the special 30th anniversary re-issue.Get Turbo 30: http://smarturl.it/Turbo30RT?iqid=vevo About the album:Origi…