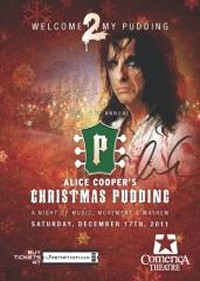 It’s hard to believe that Alice Cooper’s 11th Annual Christmas Pudding is just a few weeks away, taking place on December 17th at Phoenix, Arizona’s Comerica Theatre. If you are still searching for that perfect holiday gift then this is your ticket. Proceeds from the show benefit Solid Rock and Alice’s new teen center — The Rock at 32nd Street opening Spring 2012.

Orianthi, Rob Halford of Judas Priest, Brian “Head” Welch of Korn, The Tubes, Bruce Kulick of KISS, John Corabi of Motley Crue and Kip Winger of Winger will all be performing with Alice Cooper at this year’s ‘Welcome 2 My Pudding’ show! This is the season of giving so show your holiday spirit and help Alice and Solid Rock sell this out for the kids by buying your tickets at www.ticketmaster.com.

As long-time residents of Arizona and devoted fathers, Alice Cooper and Chuck Savale understand firsthand how desperately Valley communities must address the needs of its teenagers. The two shared their dream while playing 18 holes of golf, a favorite pastime of theirs. Together, they envisioned a Christian organization solely dedicated to helping these teens. In November of 1995, Solid Rock was founded and the dream became a reality.

Originally, Solid Rock existed to raise money for other Christian organizations and individuals with like-minded missions. However, the dream went well beyond its original fundraising foundation. Alice and Chuck envisioned a teen center that provides an outlet where teens can flourish, understand themselves, learn and equip themselves for the road ahead. Thus, the idea of ‘The Rock’ was born and the primary mission of Solid Rock was realized. Donations to Alice Cooper’s nonprofit organization Solid Rock can be made at www.alicecoopersolidrock.com.

In related news, the Pudding Music Talent Search finals will take place on Monday, December 5th and Tuesday, December 6th at The Hard Rock Cafe in downtown Phoenix. Come out and show your support for some of the Valley’s rising stars! The competition begins at 6:00 PM both nights, but get there early. Who will win this year’s competition and perform on stage at this year’s Christmas Pudding? Come out and see!

The lineup for this year’s competition: