Rob Halford on K.K. Downing’s return to Judas Priest — “What will happen will happen”

Rob Halford performed live at Alice Cooper’s The Rock Teen Center in Phoenix, Arizona, USA on August 23, 2019 and also participated in a question and answer session afterwards. Ryan Witting of the Rockin’ You All Night was there that evening and reported the following in his concert review for Sleaze Roxx: 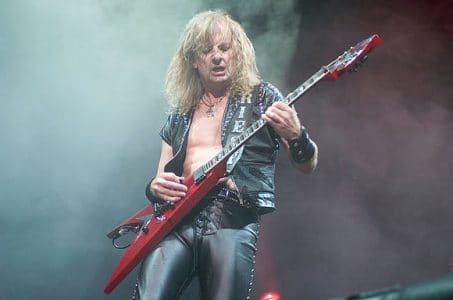 “When asked about the the possibility of K.K. Downing (who stopped performing with Judas Priest in 2011) returning to play guitar for Judas Priest, Halford stated, “It is such an emotionally charged question.  It’s like ‘Why isn’t Ace back in KISS?’ I think what will happen will happen.” Halford told his fans, “I know that’s kind of a nebulous response.  I like to be as honest as I possibly can. I think being honest is a pretty good way to live your life, and I don’t want to send mixed messages.””

Downing had first expressed his shock back on February 27, 2018 that he was not asked to rejoin Judas Priest when the group announced that guitarist Glenn Tipton was unable to go on tour with the band due to his progressing issues with Parkinson’s Disease.

At that time, Downing stated: “I have to state with great sadness also that I am shocked and stunned that I wasn’t approached to step into my original role as guitarist for Judas Priest. Whether I could have stepped back into the band or not, the potential for this situation arising never entered my head when I departed – although I too am officially and legally still a member of Judas Priest. However, I know now more clearly than ever that I did the right thing by leaving the band when I did – as it seems that my time spent in the band, and my value in terms of crafting its huge legacy, was and is unappreciated by more than one member. I sincerely hope, for the fans’ sake, that the decision not to approach me was not a financial one.”

Last month, Downing revealed that he thought that at some point, he would have returned to Judas Priest but that had not happened. In an interview with The Metal Voice, Downing indicated: “To be honest I was expecting at some point a willingness and an opportunity to step back into Judas Priest. You know how it is, things said in haste, a band is a relationship, like every husband and wife, every brother and sister. But I thought at one point it would be inevitable and I would re-enter Judas Priest and carry on where we left off but it’s proved not to be the case.  So I have to accept that and just move forward.”