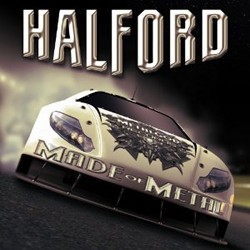 Produced by Roy Z. and recorded during 2009 and 2010, Made Of Metal showcases a bulk of material (words & music) penned exclusively by Rob Halford. Made Of Metal features fourteen (14) new Halford studio tracks including: The Mower, Made Of Metal, Fire And Ice, Till The Day I Die, Undisputed, Heartless and Thunder And Lightning.

November and December Halford touring details will be announced September 21, 2010 at: www.robhalford.com/index.php/halford-tours

‘It has been a long wait for the global Halford fan-base, and of course I’m very pleased to return with Halford IV – Made Of Metal this September 2010,’ comments Rob Halford.

‘It is probably the most personal release of my solo career; in terms of my writing and performances. Halford IV – Made Of Metal hits hard on many musical and emotional levels. I’m certain it will be recognized as one of the band’s best releases, and I’m looking forward to performing the new tracks this year, and re-connecting the Halford band with its legions of Metal fans.’