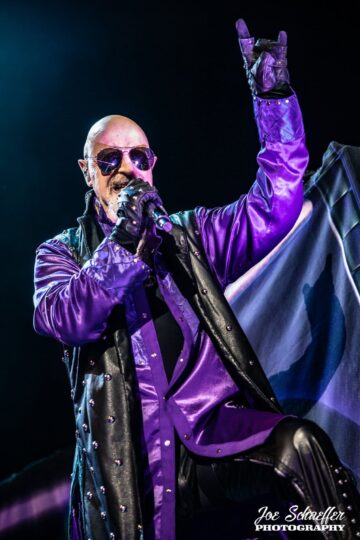 In terms of musical projects outside Judas Priest, Halford indicated: “Well, I’m happy to say that this blues project that’s been in my mind for the longest time, it’s actually started to take root now, and my brother Nige and my nephew, Alex, a bass player, same as his dad, Ian from Priest, they’ve started knocking around some really, really, strong ideas. In my phone I’ve got 12 or more practically completed blues ideas that they put together. We had such a blast doing that Celestial album last Christmas, that I thought, well these guys are great musicians. Why don’t we think about this other possibility of a blues record? So that’s being pieced together as we speak. I had two really cool ideas from the guys yesterday. They’re putting it together in my kitchen in Walsall, they’ve got a little studio set up, they’ve moved everything around and I go in and I’m making a cup of tea in and a bacon sandwich, and then they start noodling some blues and they’ve got some great ideas.”

With respect to how Judas Priest will be able to top their last studio album Firepower, Halford stated (with slight edits): “I know, I think it just shows you how passionate we still are, and how much we’re still connected and involved because let’s face it, we’ve got how many albums and hundreds of songs that could sustain us, for our tours especially, for as long as we wanted. But we’ve always felt that going through the process of writing and recording keeps you vital. You’re not living on your past glories. That first writing session back in March was absolutely brilliant. We had a ton of ideas and because of what’s happening now, there’s still, much like this blues record, there are still pieces being accumulated and going back and forth, but we’ll get the job done. I don’t know when, we should have been on the road now, as you know, we should have been out with Ozzy and we should have been doing our 50th anniversary. So, we just ask everybody to be patient and it’ll happen.”

You can read the rest of the interview with Rob Halford by media journalist Mark Dean at Antihero Magazine‘s website.