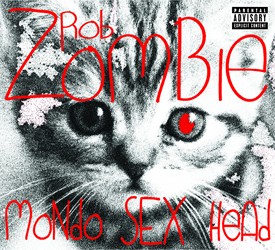 ‘Mondo Sex Head’ was curated and executive produced by Jason Bentley, music director at L.A.’s influential KCRW and electronic dance music expert. Richard Bishop, co-executive producer of RE:GENERATION music project and documentary film, supervised the project. Each track was hand selected by Rob Zombie who road-tested many of the songs in his car, driving the L.A. streets.

Throughout his career, iconic music artist and auteur filmmaker Rob Zombie has continuously challenged audiences as he stretches the boundaries of music, film and publishing. Zombie, who has sold over fifteen million albums worldwide and has earned seven Grammy nominations, is no stranger to repurposing his work, cross-fertilizing his fan base and generally pushing the limits of modern-day art. Over the years he has worked with outside DJs, remixers and producers starting with the 1992 remix of White Zombie’s first-ever, MTV-fueled hit, “Thunder Kiss ’65.”

“I like the idea of taking songs and reconfiguring them,” says Zombie about the album, who is taking an alternative approach in the digital retail space. The album will be preceded by two separate, digital-only EPs, with tracks taken from ‘Mondo Sex Head’ and exclusive bonus tracks.

Rob Zombie’s sound and style have always lent themselves to the dance and DJ culture, and he has previously released two remix albums–including 1996’s ‘Supersexy Swingin Sounds’, which featured songs from White Zombie’s previous albums as re-envisioned by the Dust Brothers, John Fryer, P.M. Dawn, Mike “Hitman” Wilson and Praga Khan, and others. Another collaborator on that album, Charlie Clouser, evolved into the band’s producer. ‘American Made Music to Strip By’ came out in 1999, featuring remixes from Zombie’s ground-breaking ‘Hellbilly Deluxe’ by Rammstein, Oliver Adams, DJ Lethal, Nine Inch Nails’ Chris Vrenna and Clouser.

Rob Zombie’s ‘Mondo Sex Head’ finds its creator returning to claim his legacy in the burgeoning EDM world. By bringing together music and film, rock and dance, arena mosh pits and dance club floors, Rob Zombie is proving a cultural phenomenon, with a fan base that is constantly growing.