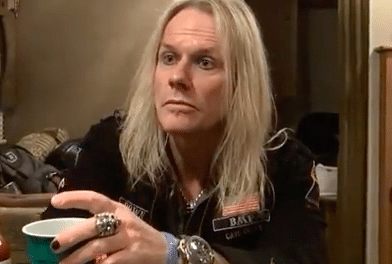 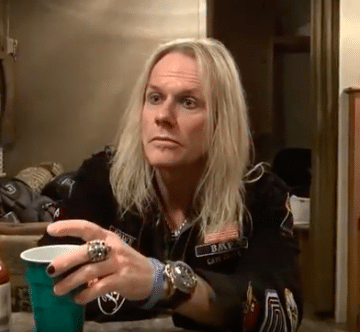 Warrant were the headliner for Day Three of the Rockingham Festival yesterday (on October 21, 2018) and scheduled to play right after Pretty Maids.

Apparently, Warrant frontman Robert Mason was not pleased with the situation either but only from his band’s point of view as the following post was made on the singer’s Instagram account.

Part of Mason‘s post earlier today stated: “… Here’s to @prettymaidsofficial for staying onstage too long like a bunch of #cunts to elongate their #15minutesoffame, stressing the crew and delaying our headlining set; I’ve been a support act hundreds of times – the rule is ” go on anytime you like but finish when you’re supposed to and yes respectful .” In spite of their egoistical attempts to stay onstage longer than supposed to, we had an immense blast and wonderful set (the house allowed us to play past curfew time)!…”

Pretty Maids‘ keyboardist and renowned producer Chris Laney seemingly took exception to Mason‘s Tweet as he indicated on his Facebook account about 12 hours ago: “I would like to thank this guy.. Robert Mason ? He claims to sing in Warrant but we “all” know him as the singer of Big Cock.. that pretty much says it all. Rob, can’t wait to see your “professional” ass again! ( Please wake up and fucking check reality) #asswipe #warrantofficial#checkthefacts“ 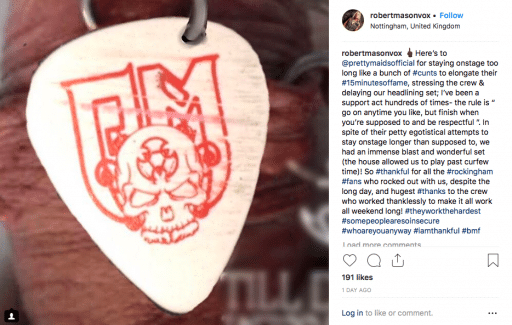 Pretty Maids‘ booking agent Nikolas Krofta was apparently not pleased either as he posted a message addressed to Mason on his Facebook page about 12 hours ago:

“Regarding the statement of Robert Mason from the band Warrant about yesterday’s last night of the Rockingham Festival.

Being the booking agent of the Danish band Pretty Maids for more than ten years – the band is in the music business for 37 years by the way and they are not really hunting after the “15 minutes of fame” – you should get your facts straight before you sit down and write a statement like this.

This was not a single concert. This was a festival. Pretty Maids were not your support but the co-headliners of the festival. The band has accepted that you took more than 1/3 of the stage for the whole festival day.

The problem was that many of the bands during the day played a little longer that they were supposed to be. Which was leading to an almost 25 minutes delay. Pretty Maids cutted their set before they went on stage by three songs already. And then towards the end of their last song the plug has been pulled.

Did you read the statement of the festival promoter Rich Cliffe?! See attached.