Warrant and The End Machine frontman Robert Mason was recently interviewed by Love Is Pop. Earlier this year, The End Machine consisting of Mason and former and/or current Dokken band members — guitarist George Lynch, bassist Jeff Pilson and drummer “Wild Mick Brown — released their debut self-titled album. The band was first known as Super Stroke before it changed its name to The End Machine. 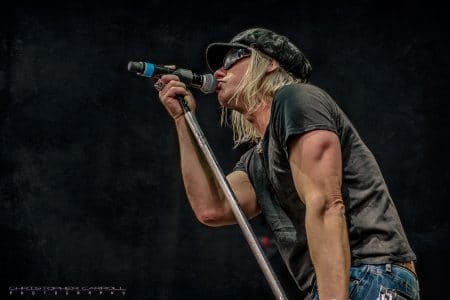 In terms of the rumour that the band was initially going to call itself Super Stroke, Mason revealed: “I’m hoping this happens less and less, but you’re the first person to ask me that today out of eight or nine phoners in a row here. So, I will tell you this is the definitive answer. Because George Lynch is not a lyricist, when writing song ideas he’ll start with a guitar riff. But for each demo he is sending, just so it’s not song one, song two, song three, George likes to affix kind of joke, or parody, or funny, or what he thinks are interesting titles, to songs so you can identify which one it is. There was one called “Out in the Cold.” There was one called “Last in the Attic” or something like that. He had one called “Super Stroke,” which I thought was funny. And we were doing demos for the record and I hadn’t written all the lyrics yet.

So, we’re putting songs together and Frontiers really wanted to name the band and put some press out there. I get it. They were tired of saying four separate names and having to cross reference all the other stuff, but even so someone – it might’ve been Mick – said Super Stroke, it’s right there, and somehow an e-mail got sent to the label. And I was never really for it, but it kind of got out that way. Once again, you’ve got four band members, and several people at the record label, and somebody said, well, if you absolutely have to name it, do this. And it was never really the name of the band. That was a joke title for a song that ended up being something else entirely once I put lyrics and melodies to their musical idea. So, that’s the end of the story. It’s funny, and yes it got out to the press, and now I’ve had to do up-teen damage control conversations.”

With respect to who suggested the band name The End Machine, Mason advised: “Once again, I think I did, but it came with everybody throwing their two cents in. We had several different things. It’s the toughest thing in the world to name a band. All the cool names have been taken. And at the end of the day, does it really matter that much? I’d rather concentrate on the music anyway. And I didn’t want to have anything where you try to sound too cool or you try to sound too whatever. It was one of those things that were battered back and forth between all the parties involved several times.”

You can read the rest of the interview with Robert Mason at Love Is Pop.