McAuley was asked who suggested that the Michael Schenker Group name be changed to the Mcauley Schenker Group when he came on board to which he replied (with slight edits): “I was auditioning at Rudolf’s [Schenker] studio, I was the last 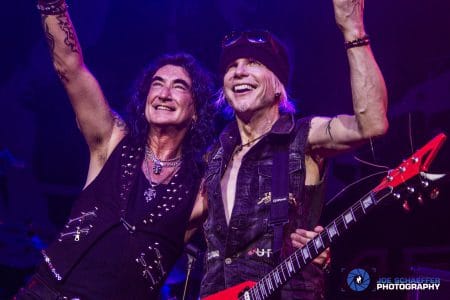 of 17 singers, I had previously turned down Michael [Schenker] four years prior when he came down to see me in my previous band Grand Prix. He was with Cozy Powell, Chris Glen and Andy Nye, they asked me to come in and rehearse with them, like with everything else timing is everything. When I got the call to come to the studio four years later, Rudolf and Klaus [Meine] and management were there and Michael says, “Interesting that your last name starts with an ‘m’ and my first name starts with an ‘m’, I have decided that I’m calling this band Mcauley/Schenker Group! I was like, “No, you can’t do that! I don’t feel comfortable doing that”! I thought that the idea was just crazy because M.S.G. was already a well established band and the logo was identifiable within the rock world. Michael said, “You’ve got the gig and I get the name”. So that was that! [laughs] I was never up for it, I was never up for it, but Rudolf and management liked the idea. Thirty years later, we have included some of the songs from the Mcauley/Schenker era in Schenker Fest.”

In terms of whether he received any push back from M.S.G. fans for writing two of the band’s most commercial singles in “Gimmie Your Love” (from the Perfect Timing album released in 1987) and “Anytime” (from the Save Yourself album released in 1989), McAuley advised: “Well, the label and management were looking for radio play in America and they wanted to get videos played on MTV. When I became part of the band, that was the first time that Michael got any of that. I think everyone was thrilled with the songs that I brought to the table because they helped to hammer away at getting airplay on radio and MTV. We needed to get the ‘hit’ video on MTV to get the good tours, but at the same time, there were the hardcore fans that would be like, “This new singer has just destroyed everything that was M.S.G.”! Years later I have to point out I didn’t write the music, I wrote the melodies and the lyrics! Michael Schenker wrote the music! [laughs]”

You can read the rest of the interview with Robin McAuley by Ruben Mosqueda at KNAC‘s website.

The music is best described as mostly melodic hard rock with progressive undertones. Schenker is famous for his half-black, half-white Gibson Flying V electric guitar and for his unorthodox approach to lead guitar. He is sponsored by Dean Guitars and is well known in the neo-classical genre.”

Mcauley Schenker Group‘s “Anytime” video (from Save Yourself album):