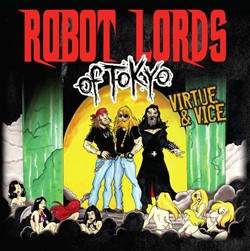 The Robot Lords Of Tokyo are the brainchild of Ohio-based songwriting duo Rick Ritzler (drums, guitar) and Paul Jones (vocals, guitar), who came up with the idea for the guest-laden project in 2006 and have since released two critically acclaimed albums on their own RLOT Records. Renowned metal scribe Martin Popoff called their 2009 sophomore effort, ‘Whiskey, Blood & Napalm’, “the best indie I’ve heard in a decade. Like an ass kickin’ Black Label Society crossed with The Sword, it’s a masterpiece of bludgeoning perfection and it will knock you on your ass.” His colleague Bob Nalbandian of Shockwaves/HardRadio called Jones “one of the most powerful new vocalists in metal today”, while Classic Rock Magazine named ‘Whiskey, Blood & Napalm’ one of their Top 50 Albums of 2009.

For ‘Virtue & Vice’, Ritzler and Jones have once again teamed up with producer Viers to cook up their unique combination of classic metal riffing, stoner/doom grooves and southern swagger, sprinkled with just the right amount of shredding lead guitar pyrotechnics. In addition to the record’s nine new sonic sledgehammers, the Robots have once again reworked an obscure classic from the hard rock vaults, this time tackling the title track from Cinderella’s 1986 debut, ‘Night Songs’.

Purchase and preview ‘Virtue & Vice’ at www.cdbaby.com/cd/robotlordsoftokyo, and learn more about the Robot Lords at www.robotlordsoftokyo.com or www.facebook.com/RobotLordsofTokyo.