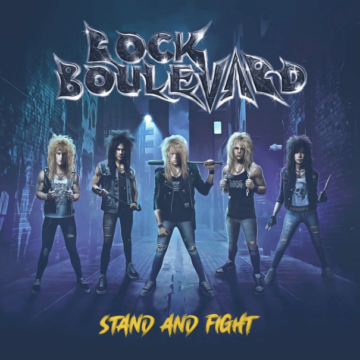 “It was the fall of 1985, Deland Voth (Slang Warfare) and Robbie Woldridge (Catastrophe) were both in college playing for the University of Nevada marching band. Both musicians felt their talents were not being fully utilized because the director gave preferential treatment to less talented senior members of the band. Robbie played the crash symbols and Deland played the saxophone until they decided to quit the marching band and start their own rock band. Deland’s guitar playing was inspired by Eddie Van Halen and Randy Rhoads as well as bands such as Megadeth, Quiet Riot and Icon. Robbie’s drumming was inspired by Neil Peart, Tommy Lee, and Alex Van Halen. After playing for a few months, Deland and Robbie found an ad in Bizarre Guitar music shop for an available vocalist who was looking to join a hard rock band. 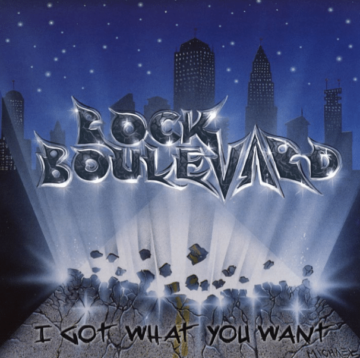 The guys reached out to the vocalist, Jeff Kerr, who had just recently departed the band Waze Guys. Jeff met up with Deland and Robbie in a small rehearsal studio where they jammed for a few hours. Before the night was over, Deland and Robbie asked Jeff to join the band. After a few weeks, the band recruited Kyle Eigenmann on rhythm guitar and Sai Williams on bass. Shortly after the band had completed their line-up, Jeff decided to leave the band. After a few failed attempts to bring him back to the band, they found a replacement. Jeff, however, soon decided he was ready to return. To determine who would continue as lead singer, the band decided to have each vocalist sing “Unchain the Night” by Dokken. Jeff won the competition and reclaimed his spot in the band.

The band auditioned for the TV show Star Search and performed their song “Mystery Woman” to show off their skills. On the way to the audition, the guys discussed a name for their new band. As they sat in their car at a red light, they looked up and read the street sign above the intersection “Rock Blvd.” They instantly knew that they had found the name of their band.

Rock Blvd. (later known as Rock Boulevard) began to quickly develop and polish their live shows by practicing several times a week. Their hard work soon began to pay off, as Rock Blvd. won the 1986 Reno “Battle of the Bands.” Later that year, in December of 1986, an opportunity with a promoter in Ohio presented itself, offering the band a chance to record their songs and get some very needed exposure. The band, however, risked losing their momentum in Reno. Rock Blvd. weighed their options and decided to pack up their gear and what little they had to head east. While in Ohio, the band took jobs at the promoter’s Cadillac dealership. The guys, with their rock star images, were an oddity in the car dealership business. They were labeled “The Bon Jovi’s” as they worked the dealership by day and the clubs by night. The band began gaining popularity and played a different club five to six nights a week. Rock Blvd. quickly became one of Ohio’s most popular hard rock attractions and even gained notoriety for playing on the rooftop of a club across the street from one of the area’s top strip clubs. The band played their show while simultaneously being entertained by the strippers on the rooftop across the street.

Rock Boulevard‘s “How Many Times” track (from Stand And Fight album):

In 1987, Rock Blvd. signed to Fraternity Records and entered the studio to record their first album. Robbie completed nearly every drum track on his first take. The two tracks, “One Time Lover” and “Y R U Lyin,’” were released on a single to garner more exposure. The rest of the tracks were left unreleased until 2020 when the band signed with Metallic Blue Records.

After recording their album and months of playing in Ohio, the band changed their name to Rock Boulevard as they felt the new spelling was more suitable for the direction the band was taking. Shortly after the name change, Sai Williams and Kyle Eigenmann decided to return to Reno, Nevada. Not willing to throw in the towel, Rock Boulevard, began holding auditions for a new bass player. David Lantz (Hammer Lane, Metal Toyz, Trip, Nemesis), an Ohio native, packed up his gear and drove over two hours in the snow to audition for the band. Just before he plugged in, he realized that he had left his bass cord at home. After a few frantic moments and a few laughs, the band walked over to another band’s rehearsal space and asked if they 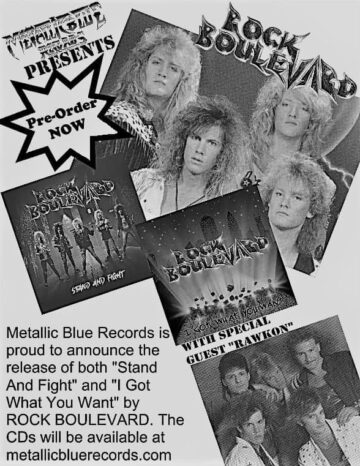 could borrow a cord for twenty minutes. Once David plugged in, it didn’t take long before the guys knew that they had found the perfect replacement for Sai Williams. Shortly after David Lantz joined, Rock Boulevard found a replacement for Kyle Eigenmann in a talented guitar player named Michael Hill.

Shortly after the line-up change, Rock Boulevard also decided that it was in the band’s best interest to move back to Reno. Jeff Kerr, who had found success at his day job and had established himself in Ohio, eventually parted ways with the band as did Michael Hill. The remaining band members asked David to join them back in their hometown of Reno. David packed up his belongings and with five hundred dollars to his name, he moved across the country to retain his spot in Rock Boulevard.

With the departure of Jeff and Michael, Deland Voth took over on lead vocals and Rock Boulevard picked up a new guitar player named Dennis Fecko (Manikin Laff). The band recorded a three track demo with their new line-up. The demo included a re-recorded version of “How Many Times” as well as a Micheal Hill song, “You Left Me Cryin,’” and the new song, “Self-Sacrifice,” that was written by David Lantz and Deland Voth. However, it was not long before Dennis Fecko left the band to join with Manikin Laff, reducing Rock Boulevard to three members once again.
​
It was now 1989 and Rock Boulevard was back in Reno looking for the right guy to complete their band. They were unsuccessful in finding additional members before landing a gig to open for Helstar and Intruder. Rock Boulevard performed in front of the heavy metal crowd as a three-piece without skipping a beat. Rock Boulevard was rehearsing six days a week at Showcase Rehearsal Studio in Reno, Nevada. On a Sunday evening, they caught the attention of well-known lead singer Marc Grover (Vices, Axent, Rawkon, Crash Street, I4NI, Neversay), who was on the lookout for a new band after fronting the recently disbanded and highly acclaimed hard rock band Rawkon. Marc was impressed with the band’s work ethic. He was looking for guys who shared his same drive to land a major record contract. Marc’s creativity and determination helped Rock Boulevard elevate their live show by staging the band in front of a large mirror to coordinate their stage moves. During this time, Rock Boulevard started gaining in popularity as they played many of Reno’s clubs such as Del Mar Station, The Grand Ball Room, The Lime Light, Easy Street, The Tumble Weed, The Ice House, The Quake, Sierra Stix, and The Metamorphosis. They opened for Babylon A.D. and Shark Island. Other bands also opened for them, including Wreckage, Metal Minded, Midnight Sky, and many others.

Rock Boulevard’s new line-up wrote many new songs. The size of the crowds at their live shows increased accordingly and songs like “Girl You Know (It’s Your Love)” and “I Got What You Want” quickly became crowd favorites. The band was eager to 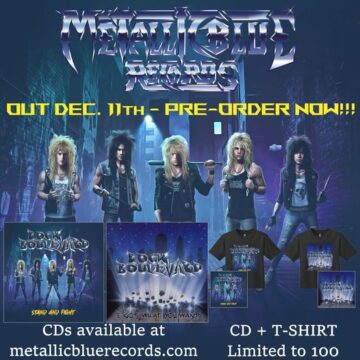 get back in the studio to record their new material. Rock Boulevard won Reno’s 1990 “Battle of the Bands” held at the Easy Street Night Club, where they entered the competition as the heavy favorite. Rock Boulevard did not disappoint the fans by playing a tight and high-energy show. Rock Boulevard was awarded six hours of studio time at Granny’s House Studio for winning the “Battle of the Bands” competition. The guys were able to pull together an additional five thousand dollars to record their self-titled album.

The band entered Granny’s House studio in 1990 to record their album while simultaneously signing with Tri Records. Robbie continued his streak of recording nearly all the drums in a single take. The album was mixed and engineered by Bjorn Thorsrud and was only pressed to 250 copies on compact disc and an additional 250 copies on cassette with the intention of pressing more copies in the near future. Rock Boulevard received many positive reviews for their album and received a lot of radio play on 96 Rock KRZQ and 105.7 KOZZ with radio DJ Max Volume.

Rock Boulevard dissolved as members went on to other projects. David and Marc moved to California to join other bands and Deland teamed up with Harry Crook (Rawkon) and Jamie Lee (Razordmaid) in the band Slang Warfare. Over the years, Rock Boulevard’s self-titled CD became a huge collector’s item and has sold for over one thousand dollars on multiple occasions. It is often referred to as one of the top ten best independently released hard rock albums of all time. Rock Boulevard’s “I Got What You Want” CD includes both the self-titled 1990 album and the “Let’s Go Wolfin’” single never before released on CD. The band wants to give their fans what they have been waiting for since Rock Boulevard can say, “I Got What You Want.”

Rock Boulevard‘s “Let’s Go Wolfin'” track (from I Got What You Want album):