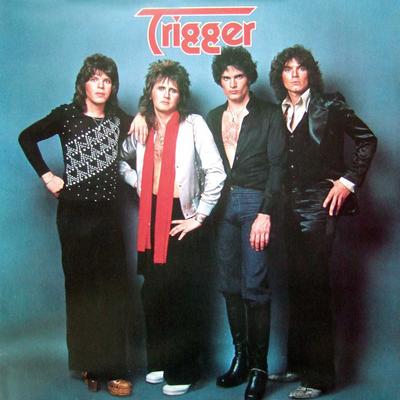 Rock Candy Records (www.rockcandyrecords.com) is proud and excited to announce that it will reissue the long sought after – and never before available on CD – self titled debut album from cult seventies US rock band Trigger.

Originally issued on the legendary Casablanca label in 1978, this album has been a hard rock collector’s favorite; for years a perennal top 3 title in virtually every reissue wish list published in on-line forums and beyond.

Trigger, a New Jersey based four piece ‘Powerpop’ band, were discovered by Gene Simmons of Kiss who helped sign them to the Casablanca label. Their sole major label album was issued slap bang in the middle of the disco era resulting in low sales but attracting huge critical acclaim. As contagious a collection of loud & anthemic, no frills riff rockers you’ll ever likely hear, the bands music combines the the best elements of groups such as Starz, Teaze, Kiss, The Babys and Piper (featuring Billy Squier).

This reissue, officially licensed from Universal Music, is also perfectly timed for the band’s recently announced reformation. All three surviving members will be playing a reunion show in New Jersey this August.

As it has become standard with all Rock Candy reissues, ‘Trigger’ will be digitally remastered from original source tapes, contain a 16 page booklet with fresh authorative 4,000 word essay from Dave Reynolds, rare photos and memorabilia with full band involvement.

Courtesy of www.sleazeroxx.com and www.rockcandyrecords.com