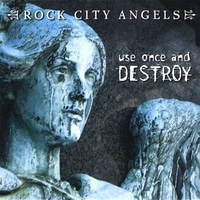 ROCK CITY ANGELS RELEASE ‘USE ONCE AND DESTROY’:

The Rock City Angels have a new music site at www.myspace.com/therockcityangels. The band will keep you updated on all the new stuff they have going on in support of ‘USE ONCE AND DESTROY’, plus you can download tracks to your profile’s music player. The band’s new CD can be purchased at www.cdbaby.com/cd/rockcityangels.

Well, it’s been a long ride, but the wait is finally over and the long awaited follow up to the Rock City Angels / Geffen Records release of Young Man’s Blues is actually finished and ready to ship this Friday, the 24th of November, a full 20 years later. Wow. It’s about time, huh? All of my friends know how much heart and soul went into this thing but it’s time for me to give you all a little back-story on it, and maybe dispel a few myths about the band in the process, so here goes.

First of all the Rock City Angels were never a “hair band.” We were just a punk rock band that decided to expand its musical horizons, exploring our newfound soul and blues influences with the same punk sensibilities and aggressive musical attitudes we had always expressed. This is what set us apart and gave us an original voice and style. Punk was about being true to yourself and having the balls to be different. So we grew our hair and changed our look to escape conformity.

How ironic then, to find that by ’88 when Young Man’s Blues was finally released that this look had become a trend taken up by first a few rock stars and wannabes, then many, until we were all lumped together, regardless of music.

Thankfully, the music critics and people who actually listened to us saw through the clothes and the hair and heard the music, but it’s still confusing to people to this day. Case in point, at a press junket in N.Y.C., a Geffen publicist, (who shall remain nameless) was checking me into the swank hotel I would be staying in. Who was waiting to pick up a key in front of me but Siouxsie and the Banshees. Aforementioned G-man sneered and whispered to me “I hate dealing with those blue haired weirdos!” Now I don’t know if he thought he was pandering to my long haired rocker status or honestly felt that way, but I looked at him stunned, and thought to myself – “Wait a minute… I’m a blue haired weirdo!” Needless to say, our friendship was derailed from that minute on. I was so excited to meet Siouxsie, who turned out to not only be a complete sweetheart, but also a fan of the band. Perception is everything – we were what we always were – a bunch of punk kids playing rock -n- roll.

People tell me it’s a shame that Young Man’s Blues didn’t break through and become a big hit, and maybe it is, but I never deluded myself into believing we would ever become ” rock stars.”Especially at that time, we were a little too rough around the edges, we definitely weren’t pretty enough and we weren’t playing the kind of music that got played on the radio. I always figured that, at best, we would forever remain a little cult band, which might just be able to make a living and continue to put out records and make great music for the folks willing to put a little effort into finding us.

It was not to be. Though we sold respectably around the world, and successfully toured 3 countries while keeping our integrity intact, it seemed as if Geffen had their hands full with other acts and didn’t feel like honoring their contract. Maybe our integrity was the problem.

Regardless, the band broke up in ’93 after a last ditch effort to make a great record with Brian Robertson for Thin Lizzy. That should have been the end of it, and along came the World Wide Web.

In 2001 there was enough interest in the band to not only put Young Man’s Blues back in print, now on Gott Records, but to also release our early demos. I was only too happy to see Young Man’s Blues back in print, but I wasn’t too crazy about the so-called “Glam Album”. How I wish the demos of our early hardcore punk hadn’t disappeared off the face of the planet, but since they had, the only alternative I could see was to make a new disc that I could be proud of to counteract what I saw as inferior material on the “Glam Album”. So, after getting the verbal o.k. to record a new disc for the New Renaissance, I came up with the money to put us back into the studio to make the record I’d always wanted to make, with music that reflected our roots with the expanded musical vocabulary that made us unique.

Much of the original band came together in Hollywood to participate in this project which all of us knew could become the last RCA disc to ever see the light of day. So with Andy Panik on bass, pre Johnny Depp guitarist Jimmy James, me on vox and rhythm guitar, and an amazing post RCA drummer by the name of Chris Yates. We went in the studio to record music I had written in Memphis on my own and with musicians I had met after RCA. Use Once and Destroy was to be my meaningful masterpiece, a timeless work of art that would leave a legacy of everything that made music the motivating force in my life.

With these guidelines entrenched firmly in my approach we laid basic tracks at Paramount Studios in Hollywood. After a month of pre-production with the idea that I would finish instrumentation and mixing in Tennessee, where the old Memphis style of playing was still practiced. And there it sat for the next six years as I struggled to get the financing to complete the project. It was one false start after another as investment hopes were dashed again & again.

People who had heard the rough mixes didn’t understand. ” It sounds great, just release it the way it is!” It had an unmistakable raw power to it, but I had constructed the music with holes for the missing parts, and I knew what these songs could be. I knew that if I released it without my vision intact I would regret t for the rest of my life.

Then, at the end of last year a miracle came in the form of someone who truly believed in me. With the help of my benefactorand a good kick in the ass, I found the studio and the engineer that would take me where I needed to go. Chris Swenson at Memphis Independent Recording Studios and I hit it off immediately. He came from the same school of aggressive, fearless rock and roll as I did and knew exactly what I was after.

The next step was ambience. I had worked with Chicago Blues guitar great Crash Kole in the past and knew he could take blues playing to a whole other level. He created a psychedelic soundscape on some key tracks with style and passion.

Stax style keyboards were next, and the idea gave me many sleepless nights. There are only three keyboard players that still practice that lost art. Booker T. from Booker T & the M.G.’s. Jim Dickinson, producer and North Mississippi Allstars alumni and a guy named Rick Steff, who I’d not spoken to in years. The first 2 were out of the question. Though Jim is a good friend of mine, his schedule is insanely busy, and Rick… the old school Hammond B-3 player was MIA. After much internet searching, I found that he was on tour with Cat Power and up & comers, Lucero. Though I had cash to record, I had no budget to pay any musicians. Awkward. But when Rick found out about this project, he put everything aside to devote some time for me. The sweet natured generosity of this man gave me the confidence to aim for the stars. He provided a level of excellence and genuine Memphis soul that took this recording to the next level.

I needed the Otis Redding style Memphis horns next and I was blessed with E.J. Dyle on trumpet and Art Edmonson on tenor sax. All the pieces of this puzzle were finally coming together.It was time to mix.

The result was the closest thing to perfection I’ve ever achieved, from the music to the artwork by Larry Poccia, the arrow has hit the bulls-eye. True punk rawk’n’soul, non-compromising with a message for those looking or just kick ass power for the casual listener. Love it or hate it, you will not remain untouched by the power, passion and honesty.

There’s a million bands out there… Finally one that counts is back. Use Once and Destroy indeed.