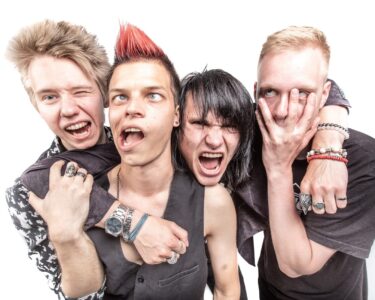 “The single is the first release from the band in two years and it will take the band’s music to a whole new level.

Lead singer Alex Wild defines the song to be a step towards more modern sound including more melodies and deeper lyrics.

“We have been writing new material for two years now. I think that “Red Roses” is the best song to tell what kind of music we are releasing in the near future”, says Wild.

Rock-Criminals took part in X Factor Finland in 2018. For the last two years, they have been a part of the Rock Academy Kouvola band coaching program. At Rock Academy, they met legendary keyboard player Juska Salminen (HIM, TO/DIE/FOR) who plays keyboards in the song. “We thought that Juska would fit this song perfectly and we asked him to play with us. It is an honour to have him playing in this song”, says Wild.”

Rock-Criminals was formed back in 2011 when four guys were 12-13 years old and wanted to make rock n roll. Ever since that, the band was walked through a long road full of great moments and the journey has just started!

The band has played dozens of successful gigs all around Finland, released some self-published material and gained a great reputation as future of rock n roll.

Rock-Criminals has opened up for the Finnish punk icons such as Pelle Miljoona OY and played at the most legendary clubs in Finland such as Nosturi and Semifinal in Helsinki.

The band has released of lot of self-published material and in 2018 their song “Lions” hit the Finland’s Top 50 Viral songs on Spotify as chart number 13. Their songs have been streamed thousands of times and videos have over 30,000 views on YouTube.”