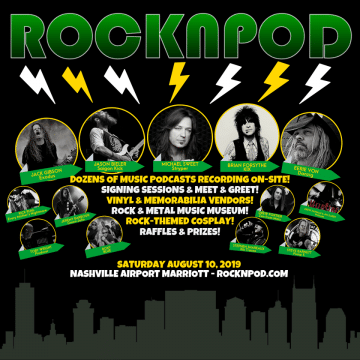 Chris Czynszak stated (as transcribed by Sleaze Roxx starting at 5:25 mark of podcast):

“Here’s how it went for me. A week or two ago, basically there’s like two groups. I think there’s one or two groups on Facebook. It’s like the remaining Vinnie Vincent fans that love. He can do no wrong…. It’s not that many. Of course, I’m not allowed in that group you know. I don’t want to be in that group to be honest but somebody from the group has been leaking the info from that onto the KISS FAQ Message Board, which is an amazing place and where I get most of my KISS news….

“So a week or two ago, they posted this update thing from this guy Steven that’s Vinnie‘s handler now. And it’s funny, I talked to Steven a year ago and things seemed cool between me and him. I guess we’re still friends on Facebook but I haven’t talked to him so I have nothing bad to say about Steven. If he wants to work with Vinnie, more power to him but… So essentially, it was a message from him but as you know, as we knew with Randy and people in the past, you know, messages from people that are with him tend to be from him…. Essentially what they said was that Vinnie was planning a birthday bash in August in Nashville and you know, it would be a thing where he would do songs and stories. He would bring his acoustic guitar. He would do signings…. Bring your Vinnie march, your KISS merch to buy, sell and trade. Hmmm. That sounds like an Expo…. And they said that they were shooting for 30 people to come to this and I heard through the grapevine that the priceline was $300… So I read that but I see at the top of the post, it says, ‘Date: Saturday, August 10th — Venue: Nashville Marriott.’ Well, there’s something else going on August 10th at the Nashville Marriott [the Rock N Pod Expo 3]. 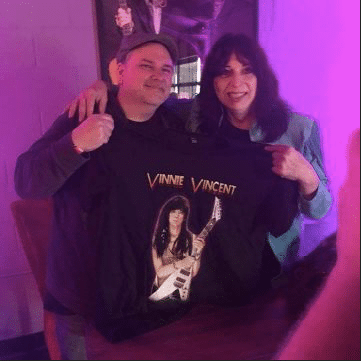 At first, I was like, ‘Well, is he taking like the British and takin the piss to screw with me by doing this?’ I saw it. I just laughed. I contacted Joe, my co-organizer, and said, ‘This is, this is ridiculous.’  He got a good laugh out of it too. And I was like, ‘OK. This is weird.’ And I kind of let it go. Just said ‘Whatever.’ If he has it there, great… The main convention for Rock N Pod is just outside the building. The big dome building that’s outside of the hotel… And you walk through the hotel to get into it but there’s also other ballrooms but we will be using one of those other ballrooms for the live podcast session…. Ian and Ralph will be on stage in that area and that’s where every other room to rent is…. I just let it go. I got a laugh and I wasn’t even going to mention it. Like whatever. Do what you want Vinnie. I don’t care….

I want nothing to do with the guy. But then, the next thing you know, like a few days ago, I get a call from my co-organizer Joe and he tells me that Vinnie‘s lawyer had reached out to him about doing some sort of promotional tie in between the events where it would be like, we would promote his birthday thing, he would promote our Expo, and like, the remaining tickets that they need to sell, they would give is the cost of the Rock N Pod tickets to make some money off of it. Joe was telling me about it and said that ‘I promised that I would pass this on to you and see what you thought.’ And I thought about it. I himmed and hummed….

So I kept thinking about it for a minute on the phone and said, ‘You know what? No! I am not going to do this.’ I can’t work with this guy again.It’s not going to happen…. I told him, ‘Go back to the lawyer and tell him had he not dragged my name through the mud and completely lied about how things went down last year, which he did. I don’t care if you believe him or not, trust me. I have no reason to lie. I’ve got nothing to lose…. He dragged my name through the mud and misrepresented everything that we had set up and I told him that I did not want him coming to the event because he was changing things. He goes on and bashes me and makes it like he bailed on the event. He pulled out. Not true at all but had to explain how I felt and felt that I was being taken advantage of…. Why agree to something and then try to change the terms? But you know, look who we are talking about?

I said, ‘Tell the lawyer that I did not appreciate how he acted last year and in light of everything that’s happened this year with things being planned and cancelled, and all this stuff, I have no desire to ever work with him again and let him know that.’ And that’s where I left it.”