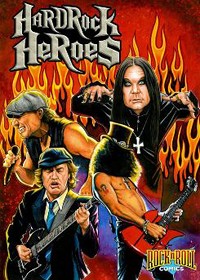 Steve Jones of USAToday.com reports that Rock ‘N’ Roll Comics, which in the early ’90s pulled back the curtain on the rock-star lifestyle, are making a comeback.

The comic books, which chronicled the careers of popular musicians and at times stirred controversy, are being repackaged as graphic novels.

Bluewater Productions, a Vancouver, Wash.-based publisher best known for its extensive line of biographical comics about celebrities, politicians and historical figures, has teamed with Revolutionary Comics, originators of the rock biographies.

The 300-page The Beatles Experience, released in February, collects the eight original issues on the Fab Four in one bound edition. Next up is Hard Rock Heroes, out April 13, which features the stories of Guns N’ Roses, AC/DC, Black Sabbath/Ozzy Osbourne, Van Halen and Anthrax, plus 40 never-released pages on Metallica.

Future issues will arrive on a semi-monthly basis, and Pink Floyd (May), Joan Jett (June), Led Zeppelin(July), The Seventies: A Rock Pantheon (November) and The Elvis Presley Experience (December) are scheduled. The graphic novels sell for $17.99 and sport new cover art with forewords written by music critics and artists.

Bluewater’s Female Force series, which focused on Sarah Palin, Hillary Clinton, Caroline Kennedy and Michelle Obama, attracted the attention of Revolutionary’s former managing editor Jay Allen Sanford. “We were about to break into graphic novels, and I asked him if he would want to do something like this,” says Bluewater publisher Darren Davis.

Revolutionary published its unauthorized biographies from 1989 to 1994. Not all musicians were thrilled: New Kids on the Block lost a trademark-infringement suit against the company in a 1990 ruling that gave the comics the same protections granted other biographies.

“They kind of trailblazed it for us,” Davis says, referring to the First Amendment protections won in the suits. “I’m happy they did all of the legwork.”

A 2005 documentary, Unauthorized and Proud of It: Todd Loren’sRock ‘N’ Roll Comics, traced the company’s history. Founder/publisher Loren was murdered in 1992, and the company ceased publication two years later.

The comics came along at a time when details of rockers’ lives were not so accessible, says Kiel Phegley, news editor for comicbookresources.com.

“By the end of the ’90s, the need for Rock ‘N’ Roll Comics had been supplanted by things like (VH1’s) Behind the Music,” Phegley says. “Some bands took exception to having their sordid details printed in black and white with drawings and narration.”

Courtesy of www.sleazeroxx.com and www.usatoday.com