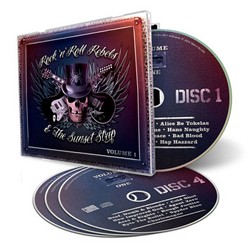 Scheduled for release on March 24th, ‘Rock ‘N’ Roll Rebels & The Sunset Strip: Volume I’ features 36 bands from the ’80s and early ’90s Los Angeles rock scene and is a four-disc collection with 72 digitally re-mastered, original studio recordings. Only a small handful of these recordings were ever made available, as most were meant primarily for the ears of recording industry giants in an effort to be signed. ‘Volume I’ also features a 60-page color booklet with a close up look at each band, over 100 original archived photos, and the 13-page “Rock ‘N’ Roll Rebels: Sunset Strip Certified” narrated by JohnnyX of The Wild and Adam Gifford of Paradise, both well-known bands on the Sunset Strip.

‘Rock ‘N’ Roll Rebels & The Sunset Strip’ will be an eight-disc collection in two volumes, featuring over 160 re-mastered and unreleased songs, primarily meant for the recording industry. Each volume will feature a 60-page booklet with a behind the scenes look at each band and linear notes written by JohnnyX of The Wild and Adam Gifford of Paradise.

In the late ’70s and early ’80s, the Sunset Strip, a mile-long portion of the Sunset Boulevard, became the center of the glam and heavy metal scene, hosting groups such as Van Halen, Motley Crue, Quiet Riot, Ratt, W.A.S.P., and countless others. The L.A. rock scene blew up to epic proportions in 1982. ‘Rock ‘N’ Roll Rebels & The Sunset Strip’ were the final wave of bands, the most competitive market for rock ‘n’ roll that had ever existed.

During this era, the Sunset Strip had become a living, breathing entity of extreme depth and breadth of musicality, self-indulgence, and living in the intrepidly fast and dangerous lane. Band members were judging contests at Gazzarri’s; hanging out upstairs in the loft at the Rainbow doing a line or two of blow; downing tequila shots before a show upstairs in the Red Room at the Whiskey; chilling with friends at the front bar of the Troubadour; dropping by the Roxy to see who was playing and what was going to be shaking that evening. This was West Hollywood’s one and only, the Sunset Strip.

Net proceeds of ‘Rock ‘N’ Roll Rebels & The Sunset Strip: Volume 1′ will be donated to continued relief efforts as a result of the devastating 2013 Moore tornado. An EF5 tornado that struck Moore, Oklahoma, and adjacent areas on the afternoon of May 20, 2013, with peak winds estimated at 210 mph.