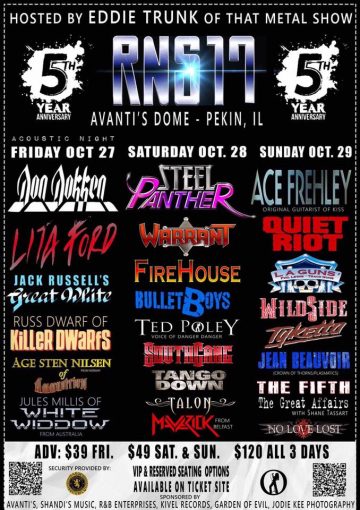 The headliners will be the one and only former KISS guitarist Ace Frehley on Day 3, Steel Panther on Day 2 and Dokken frontman Don Dokken on Day 1 (which will be an acoustic night).

The rest of the line-up has to be considered a very impressive one.

Day 2 features Steel Panther; a who’s who of late ’80s/early ’90s hair metal with Warrant, Firehouse, BulletBoys and Danger Danger frontman Ted Poley; a rare appearance period from SouthGang; some rare North American appearances from Talon and newcomers Maverick; and, the return of Tango Down (the latter who finished with the #2 album on Sleaze Roxx’s Top Ten Albums of 2016). 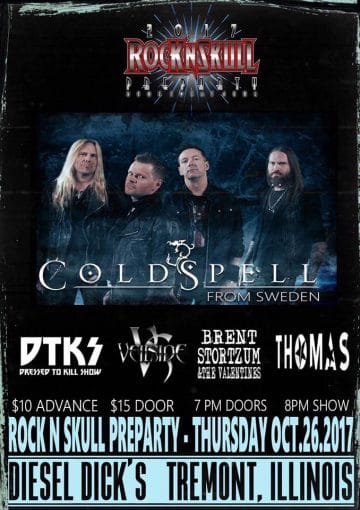 In addition, the Rock N Skull 2017 Festival is one of the most reasonably priced festivals. Aside from the usual VIP and reserved seating type packages, general admission prices are $39 for Day 1, $49 for Day 2, $49 for Day 3 and $120 for all three days. Tickets can be purchased via Rock N Skull 2017.

There are additional features as well with a Pre-Party evening on October 26, 2017 featuring Coldspell, Dressed To Kill Show (KISS tribute), Veilside, Brent Storzum & The Valentines and Thomas, as well as two after hours pre-parties on October 27 and 28, 2017 (line-ups to be announced) and a special Brunch on each day of the Festival hosted by Devil City Angels singer Brandon Gibbs (on Day 1), John Schulitt (Head East, Petra) and Leatherwolf‘s frontman Michael Oliveiri.

Rock N Skull 2017 raised some eyebrows when it pulled its partial line-up (which included Quiet Riot, WildSide, SouthGang and Jean Beauvoir among others) about a month ago after having posted it prior to the Rock N Skull 2016 edition.

Speaking exclusively with Sleaze Roxx earlier today before the new Rock N Skull 2017 line-up was announced, Rock N Skull‘s main organizer Justin Murr explained why it was decided to eventually pull Rock N Skull 2017‘s line-up and waiting to unveil the new and complete line-up today. Murr stated: “After RNS 16,the event lost $ and we had to change the way we did business. In Nov, I was informed TNT would not be playing the states in 2017 but instead touring in 2018 to support their new album. This along with the fact the bands we had announced only garnished us 43 ticket sales we decided what we thought was the right thing and totally redo the line-up for the most part and change the way we do business. Gone are the days of filling a club but now we were tasked with filling a dome and what I originally planned was not going to do this. 2017 is a make or break year for the fest, I’m all in and when announce the line-up tomorrow I think you’ll see what I mean!”