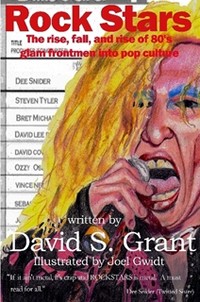 ‘ROCK STARS: The rise, fall, and rise of eighties glam frontmen into pop culture’ is a look back and forward with the glam metal singers from the eighties. Accompanied by video commentary and what if scenarios, ‘Rock Stars’ takes a tongue and cheek look at both the careers and music created during this time. From the lipstick to hairspray to ranking the best at handling the microphone, to the battle of the jeans between Jon Bon Jovi and Joe Elliott, and the huge role chest hair played in the success of KISS, glam fans will love this honest account of a genre is making a comeback and yet still scoffed at.

‘Rock Stars’ is currently available in paperback form through Lulu and Amazon. Coming soon in 2011: Oak Tree Press will be publishing Rock Stars as an eBook through Amazon Kindle.

“…Wearing tight acid washed jeans, Jon Bon Jovi made no qualms about putting “pop” back into rock. Videos focused on his ass made it appear there was an unspoken jeans rivalry between Jon and Joe Elliot of Def Lepard…”

“…I have to rethink everything regarding Rob Halford since he came out of the closet, turning from ferocious front man of Judas Priest to fierce. In hindsight there were signs. The video for “Hot Rockin” was pretty much just a bunch of guys working out in a gym. Hello!!…”

“Whether you’re a closet glam fan who’s able to laugh at yourself and the icons of your youth, or a naysayer looking for more proof that glam is worth mocking, Rock Stars is definitely worth the read” – Nicole Nash, Metal Underground

“I really enjoyed Rock Stars. It was a great look back into music of the eighties and introduces the music to new fans”- Confessions of an Overworked Mom