Rocklahoma in Pryor, Oklahoma, USA to include Warrant, BulletBoys, Straight Six and The Rumours 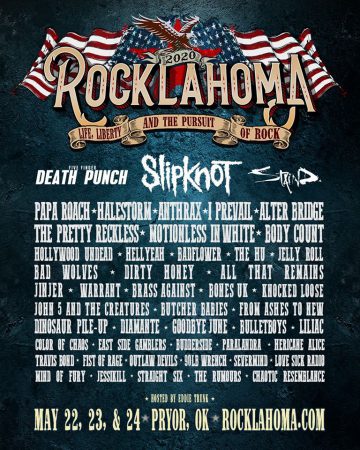 Rocklahoma has unveiled its line-up for its 2020 edition in Pryor, Oklahoma, USA from May 22 to 24, 2020 and the line-up includes a number of bands that have been covered extensively by Sleaze Roxx such as Warrant and BulletBoys along with Halestorm, Anthrax, Dirty Honey, East Side Gamblers, Color of Chaos, Straight Six, Jessikill and The Rumours. The headliners for this year’s edition for the long-time festival consist of Five Finger Death Punch, Slipknot and Staind.

Rocklahoma‘s musical direction has changed tremendously over the years as its 2009 edition was headlined by Twisted Sister, Stryper, Ratt and Anthrax and also included:

The 2010 edition saw a big change in the line-up with only a handful of bands that Sleaze Roxx would cover including Buckcherry, Cinderella, Tesla, Gypsy Pistoleros and The Last Vegas.