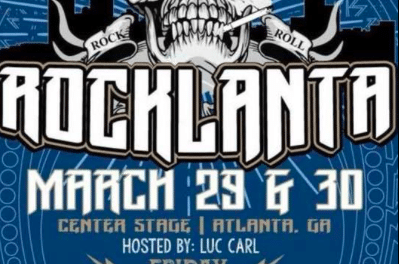 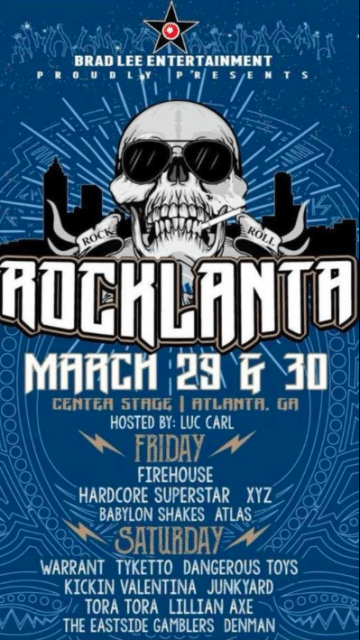 Slowly but surely, Brad Lee Entertainment revealed on its Facebook page dubbed Rocklanta’s Saints and Sinners all of the bands that will be playing at the inaugural Rocklanta at the Center Stage in Atlanta, Georgia, USA on March 29 and 30, 2019.

There were some big surprise announcements along with some repeat performers from past Brad Lee Entertainment events.

Among the surprises are Hardcore Superstar who will be releasing their new studio album You Can’t Kill My Rock ‘N Roll on September 21, 2018.

Hardcore Superstar formed back in 1997 and is the only band truly coming from overseas to play Rocklanta.

Another surprise is XYZ given that singer Terry Ilous and bassist Patt Fontaine just recently announced less than ten days ago that they are putting the band back together. Exactly who will be joining Ilous and Fontaine in XYZ at Rocklanta remains to be seen but the group will certainly be one of the most intriguing acts for the festival. Ilous was unceremoniously replaced by Great White with singer Mitch Malloy without any apparent prior notice last month. XYZ have released four studio albums: XYZ (1989), Hungry (1991), Letter To God (2003) and Rainy Days (2005).

XYZ‘s “Face Down In The Gutter” video:

xyz face down in the gutter

One more surprise which in hindsight shouldn’t be one is the inclusion of Tyketto. The reason why this shouldn’t be a surprise is that Tyketto frontman Danny Vaughn made an appearance at a Brad Lee Entertainment event earlier this year (Sleazy Slimey Sunday 3) in Hanover, Maryland, USA after his band had performed a day earlier at the M3 Rock Festival in nearby Columbus, Maryland. 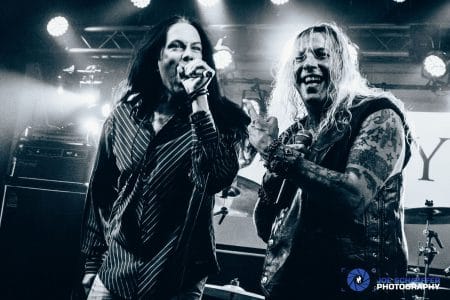 Sleaze Roxx stated the following in its review about Vaughn‘s presence at Sleazy Slimey Sunday 3: “…. Accordingly, for Poley‘s set, I was hanging back about ten rows back as I thought that I’d give myself a little break before getting stuck in the front for the three remaining bands. That being said, there is no denying that Poley was putting on a great show and the crowd seemed really into it. All of a sudden and to my great surprise, I noticed that Tyketto frontman Danny Vaughn was standing pretty much next to me. At that time, Poley had left the stage during one of his songs and was walking through the crowd while singing and posing for photos with fans. Poley was followed through the standing audience by his trusty bodyguard Sarge McIntyre who seemed to always be at arms length of the singer. I was surprised that Poley didn’t acknowledge Vaughn while making his way through the crowd. If I recall correctly, Poley did give a hug to a woman who presumably was Vaughn‘s wife so at least the Danger Danger frontman likely knew that Vaughn was in attendance. Once the song was over and the sound level down for a little bit, I quickly congratulated Vaughn on a great set by Tyketto the day before at the M3 Rock Festival. The smiling and good looking (don’t read anything in this last comment) singer responded by thanking me for coming early to see Tyketto who had an 11:00 am start time at the M3 Rock Festival.

It seemed that Poley was closing his set when he launched into the spirited Danger Danger classic “Naughty Naughty” which had everyone singing along. It was neat for me to see how Poley was so into the song as he must have played the track a million times yet he looked genuinely excited to be playing it. There was no going through the motions for Poley on this night. After “Naughty Naughty”, I thought that Poley‘s set was over but all of a sudden, the singer invited Vaughn up onto the stage along with a guest guitarist that I didn’t know. Poley, Vaughn and the rest then launched into a spirited and fun version of the Bryan Adams classic “Summer Of ’69.” Being Canadian and having multiple copies of Bryan Adams‘ second biggest selling album Reckless (I am very surprised to find out just now that Adams‘ 1991 released Waking Up The Neighbours album appears to have perhaps sold more copies than Reckless), I knew all the words to Adams‘ blockbuster song. It was odd to me that not everyone in the audience was in the same boat as I. Had “Summer Of ’69” been played anywhere in Canada, the sing along from the crowd would have been incredible. In any case, it was a lot of fun to see Vaughn and Poley combine to sing the track and a bonus to have them launch into a rousing rendition of KISS‘ ultimate rock n’ roll anthem “Rock And Roll All Nite.” Poley‘s overall performance on this night definitely went up a few notches in my mind with the very special ending, which included one of the best singers out there — Tyketto‘s Danny Vaughn.”

Subscribe To Be Alerted When We Add New Videos – http://radi.al/SubscribeFrontiers / From the album LIVE FROM MILAN 2017. Get your copy NOW: http://radi.al/L…

The final surprise act for Rocklanta is none other than The East Side Gamblers whose frontman Tony Higbee also moonlights as the lead guitarist in Tom Keifer‘s solo band. Sleaze Roxx stated the following in its review of The East Side Gamblers‘ latest EP The Big Machine, which was released last month: “Mixing some debut album era Kingdom Come groove with some classic rock, the music played by The East Side Gamblers is simply stupendous. The whole group consisting of Higbee and Josh Dutoit sharing lead guitar duties, bassist Cody Higbee (presumably Tony Higbee‘s brother based on the last name and resemblance looks wise) and drummer Chris Brewer sounds really tight. I particularly like the guitar harmonies that pop up from time to time which give a cool ’80s feel to the more modern classic guitar sound that is prevalent throughout most of the album.”