Sad news for Romeo Riot lead vocalist Mark Giovi (ex-Farcry) and his fans as the singer has been having vocal chord problems and undergoing treatments including speech therapy to be able to sing again. A GoFundMe campaign has been started to assist Giovi cover the treatment expenses.

The GoFundMe campaign states in part: 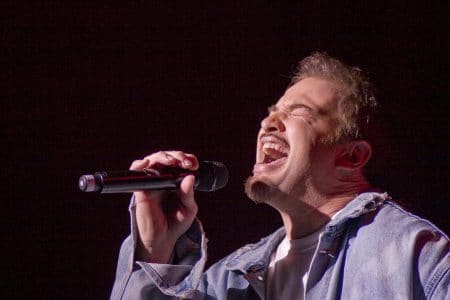 “Mark Giovi is a fellow musician and vocalist who has unselfishly given his time, talent, and love for others in need. Now it’s time for us to give back and show our love for him. From belting out Italian arias to screaming rock ballads, Mark is the most versatile vocalist I have ever had the honor of working with. The many years Mark has spent entertaining audiences and giving to others has caught up with him. He now has difficulty with his vocal cords and has recently traveled to Portland, Oregon to receive medical treatment, much of it not covered by insurance. After 2 weeks’ rest, he hoped that the treatment would work, but he was told by his doctors that he must travel to Portland multiple times to see a speech therapist. The therapy and medical treatment is not only costly, but also the travel expense and lodging in Portland and lost income will put a financial strain on him and his family. It is estimated that he may not be able to sing (and not work) for at least 3 months.

Mark is a proud husband and father of two beautiful children. Born with cerebral palsy, Mark has never asked for anyone’s help and has never let his “different kind of normal” (as he likes to say) get in the way of sharing his beautiful gift of song with everyone around him. From helping our vets to donating his time to “Lifelong Dreams”, a charity for children with special needs, Mark has never said “no” to any charity or fundraiser that has asked him to perform. Now it’s our turn to give back to a very proud man: please donate whatever you can to help out. A 2.9% processing fee plus 30 cents per donation of the funds raised goes to GoFundMe and the remainder goes to Mark. I am not receiving any money from this campaign. This GoFundMe campaign is set up so that Mark will have the only access to this account as the sole beneficiary. Please share this post among your friends. Thank you and may God Bless you for your help and prayers.”

Hard hitting arena Rock. The album Bon Jovi never made !! Think Night Ranger, Slippery Era Bon Jovi with a wall of guitars and vocals. This is a 10 song album that is begging to be played on a big stage or cranked in your stereo, car or ipod.