The Ron Keel Band has released a new single entitled “Homesick” that is available for purchase through the usual digital outlets. 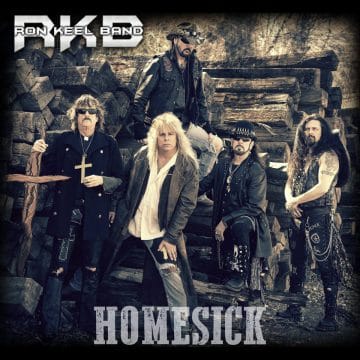 The Ron Keel Band has released a brand new single, the blistering guitar-driven track “Homesick,” which is now available worldwide on iTunes and all other digital music distribution services.

RKB’s 21st century take on the 1981 Atlanta Rhythm Section tune continues their tradition of covering southern rock classics like “Ghost Riders in The Sky.” Keel debuted “Homesick” on the popular “Morning Crash” show on KBAD 94.5 FM radio in Sioux Falls, and the song has become a highlight in the band’s live show as they continue to headline festivals, fairs and biker events as well as support dates for Tesla the Band and Hairball this summer.

“I heard the original version on the radio one day a few months back,” the Metal Cowboy explains, “and it practically jumped out of the speakers, grabbed me by the throat, and screamed ‘SING ME!’ It reminded me of when Keel covered ‘Because The Night’ on the ‘Final Frontier’ album – the right song at just the right time. It’s a great fit for us.”

The single release by Wild West Media will be followed up by a full production music video that features rare clips and images from Ron’s history and that of band mates DC Cothern (lead guitar), El Diablo (bass), The Rev (drums) and Dakota Scott (keyboards).

The track was cut at Cathouse Studios in Sioux Falls, and co-produced by Keel and Mike Dresch who recorded and mixed the single. One interesting side note is the appearance of a mysterious whistle on Ron’s lead vocal track about two-thirds of the way into the song.

“That is a human whistle, loud and clear,” Ron insists. “It is simultaneous with a vocal thing I did, and I can’t whistle, never have. And I certainly can’t sing and whistle at the same time. It reminds me of Ronnie Van Zant or Danny Joe Brown [from Molly Hatchet], the way those guys incorporated the whistle into their vocals. I can’t take credit for this one – somebody else was in that vocal booth with me that day.”

Keel admits that while recording and releasing a full album remains a priority, it was important for the band to have a new single and video to share with fans this summer. “Everybody gets homesick,” he adds. “We hope they enjoy this song as much as we do.”