We can expect a lot of new material from the Ron Keel Band in the two years or so as the group fronted by Keel and Steeler frontman Ron Keel will be releasing a covers album titled South X South Dakota in late April and a new studio album in 2021 via HighVolMusic.

The following message was posted in part on HighVolMusic‘s Facebook page earlier today (with slight edits): 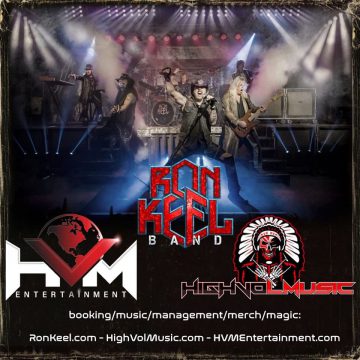 The first release from this new team will be “South X South Dakota,” the band’s tribute to the icons of southern rock which features new covers of classics by the Allman Brothers, Lynyrd Skynyrd, Outlaws, Molly Hatchet, .38 Special, Blackfoot, Marshall Tucker Band and more; SXSD also includes a hot duet “(Don’t Misunderstand Me”) between Ron and multi-award-winning artist Jasmine Cain. A release date is set for late April, as Ron Keel Band prepares for a busy summer touring season while writing and recording a new all-original album to be released on HighVolMusic in early 2021.

“This is a win-win for everybody,” Chavis proclaims. “Ron Keel brings a lot to the table and a lot to the label. We’ve been friends for almost twenty years, and I’ve been a fan of Ron’s work much longer than that. Together we’re going to release and promote some great music and make a lot of noise in this business.”

Ron Keel, whose 2020 performances will include multiple appearances on the Monsters of Rock Cruise as well as his first-ever tours of Australia (including Melodic Rock Fest) and Canada, echoes that enthusiasm. “It’s a perfect fit from every angle. Bill, Lori [Lori Chavis, who handles marketing & publicity for the HighVolMusic empire] and I all have a deep respect and appreciation for past accomplishments, while sharing a relentless commitment to move forward and tackle new challenges.”