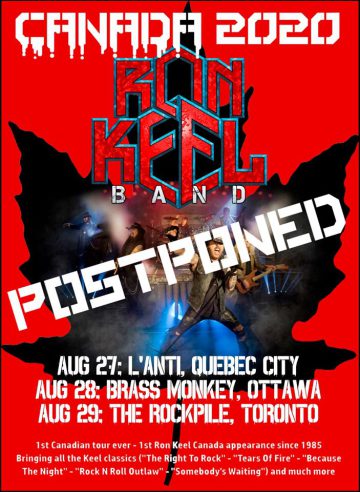 Sad news for fans of Keel and the Ron Keel Band as the latter’s mini-tour in Canada from August 27 to 29, 2020 has been postponed presumably due to the ongoing Coronavirus pandemic.

This would have been Ron Keel‘s first show on Canadian soil in 35 years.

The Ron Keel Band released their debut album Fight Like A Band last year and are set to release their southern rock covers record South X South Dakota via HighVolMusic on April 24, 2020.

“As the postponed events pile up, the truth hits home. The guys in the band and crew miss each other, and we miss our People even more. Stay safe & healthy, try to stay somewhat sane, and enjoy the new Ron Keel Band album #SouthXSouthDakota (http://ronkeelshop.com). The new music video for “Red White & Blue” is in post-production now and we’ll have a major video premiere announcement for you soon.

RKB is ROAD READY as soon as it’s safe for our People to gather – we’re hoping the Sturgis Motorcycle Rally will be the right time and place, fingers crossed.”