It’s been a wild two weeks for Melodic Rock Fest in Australia starting with The Defiants lead vocalist Paul Laine announcing back on February 25th that he was pulling out of the three-day event scheduled to take place at The National Theatre in Melbourne from March 6 to 8, 2020. Numerous other bands followed suit including Eclipse, Crazy Lixx, FireHouse, XYZ, Tony Harnell, Kvlts of Vice, The Radio Sun, Cassidy Paris and FM.

A number of acts / bands came to Australia to perform at “side” shows prior to many of the other acts / groups pulling out including Ron Keel, Janet Gardner, Enuff Z’Nuff and Reckless Love. Later on, Midnite City also took the plunge and arrived in Australia to play a “side” show in advance of the Melodic Rock Fest. 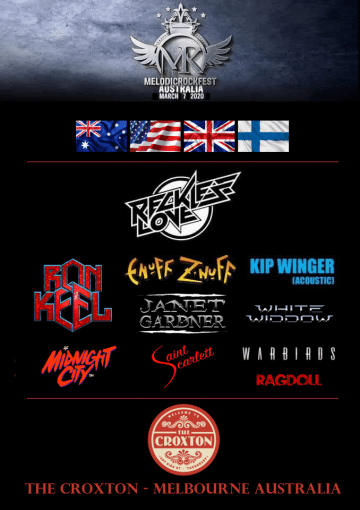 Not only did many acts / bands pull out of the three-day event but eventually, the venue itself pulled the plug.

Notwithstanding all these obstacles and difficulties, the Melodic Rock Fest in Australia will be proceeding but at a different venue (The Croxton Bandroom) in Melbourne and on only one day (March 7, 2020) rather than three days.

“We’re extremely pleased that MelodicRock Fest will indeed take place tomorrow in Melbourne, Australia. Bands from the UK, Finland, the USA and Australia will join together to celebrate the music we love with the fans who are keeping it alive.

The festival and corresponding club shows surrounding it have been the subject of a lot of headlines and discussion this past week. I understand why some of the bands chose not to appear – in fact, I have been in contact with many of them, as they reached out to me for an honest assessment of the situation. I spent a great deal of time giving them step-by-step updates and letting them know our status. One of those friends is Kip Winger, who decided to get on the plane and get on stage tomorrow.

Those who know me understand that I always put an accent on the positive – and for us, this has been an incredibly positive experience. I can tell you that my contract has been honored down to the letter, and I’ve been paid in full. I’ve had reliable ground transport every step of the way. I have stayed in luxury accommodations and I’ve been surrounded by a really nice team and staff who have worked tirelessly to pull this off when many promoters I know would have just disappeared and left us hanging. And I can tell you that we would do it all over again in a heartbeat.

As we traveled from Newcastle to Sydney to Brisbane to Melbourne, from one airport and hotel to the next, with our tour mates in Enuff Z’Nuff and Janet Gardner & her band, and Jason Crosson and his excellent group Crosson, it was indeed challenging at times. In fact, bassist Ben Webster dubbed this tour “The Amazing Race” early on – as we scrambled from one destination to the next, usually not having flight/ground/hotel details, collecting “clues” that would lead us to the next destination. I swear, when we landed in Sydney the ONLY clue we had was the name of the venue. But we got there and finished the day with an epic hot sweaty rock concert.

The cowboy in me just went along for the ride – I’ve climbed many a mountain, and you can’t know every ledge and foothold along the way – you’ve got to trust your gut and take every mountain one rock at a time. To the credit of everyone involved on this tour/festival, nobody ever got stressed out or lost their cool. We were all just enjoying the journey together and hoping for the best. And the best is yet to come, as 10 bands from across the planet give us all a day to remember tomorrow March 7th at Melodic Rock Fest.

To the fans who are disappointed and upset, I get it. There were a lot of bands I wanted to see too, that are not coming. But last night in Melbourne I saw two bands – Reckless Love from Finland, and Midnite City from the UK – that were absolutely amazing, and I may not have had the chance to see them live if they hadn’t had faith, gotten on the plane, and got their asses to Australia to be a part of this festival. I got to stand in the front row and see White Widdow and my boys tear it up. And we all plan to give you the best show possible at The Croxton Bandroom.

To Peter Hoffmann, Pete Naylor, Saphire Starr, Kris Peters, our driver Gino, Jason Crosson all the great tech staff we’ve had on this journey – thank you for staying true to your words and your vision and for making this dream come true for me. To the other artists who have shared this Amazing Race with us, I applaud your fortitude – I’ve enjoyed this journey with you, and I look forward to a killer show tomorrow and years of friendship ahead.

To my good friend Jules Millis and his lady Kaitlyn King, thank you is not enough for your friendship and hospitality. Looking forward to a relaxing dinner when this is all over with!

To all the wonderful fans I’ve met and friends I’ve made this past week – thank you for the good times, the laughs, the stories, the handshakes hugs and selfies, and the cocktails!

Most of all, thanks to the musicians backing me up on this tour – Dave Cothern, Enzo Almanzi, Ben Webster and Gavin Hill – I know we’ll never forget this experience, and the deciding factor every step of the way has been the music and your hard work and talent to bring that music to life. I have no doubt that energy will shine from the stage tomorrow at MelodicRock Fest at The Croxton Bandroom in Melbourne, Australia.”