For those who don’t know, Keel, Ron Keel Band and Steeler frontman Ron Keel has a Patreon page where he provides his Patreon subscribers with exclusive audio, video and fan experiences. Prices range from $1.99 US per month to $100.00 US per month.

“Normally I would make this an All Access-only post, but I’m going public for a change. I will have some very special exclusive content for my Patreon subscribers once these next shows are done, including a sneak peak at some of the video footage for the new single “Don’t Misunderstand Me” featuring Jasmine Cain.

My Sturgis 2020 Road Report includes a recording of Ron Keel Band “The Right To Rock” Live at The Sturgis Motorcycle Rally. Enjoy it here and share if you like: https://www.patreon.com/posts/40500899

We look forward to seeing many of you at Jam Against Hunger tomorrow in Sioux Falls!”

Wikipedia summarizes the Sturgis Motorcycle Rally as follows (with slight edits): “The Sturgis Motorcycle Rally is an American motorcycle rally held annually in Sturgis, South Dakota, for ten days usually starting the first Friday in August. In 2015 the city of Sturgis officially expanded the dates to have the rally start on the Friday before the first full week of August and end on the second Sunday. In 2016, Sturgis City Council passed a resolution to begin the Rally on the first Friday in August every year. It was begun in 1938 by a group of Indian Motorcycle riders and was originally held for stunts and races. Attendance has historically been around 500,000 people, reaching a high of over 700,000 in 2015. The event generates around $800 million in annual revenue.”

“You know I’m a guy who is always focused forward on the next challenge – but as I prepare for this week’s big shows – tomorrow’s headline slot at Jam Against Hunger in Sioux Falls, and Tuesday’s worldwide online Live Stream concert – I have to slow down for just a few minutes to recap the Sturgis Motorcycle Rally and offer a few updates.

The five shows in Sturgis were a blast, to say the least. The RKB really enjoys hanging together and playing together; the band and crew are friends first and we’re always having fun together. And from a performance standpoint, we really had a great situation. Back to back nights headlining opening weekend at a cool new (3 years old) venue) called Kickstands, and then three nights in the Pavilion at Glencoe Camp Resort. 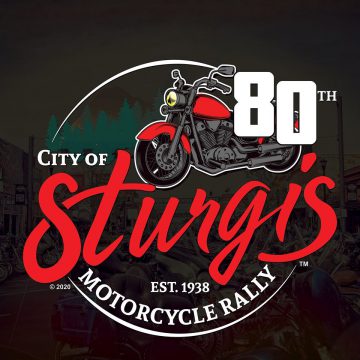 We settled into two cabins on the Glencoe property, so once we got moved in we were there for the duration, no having to shuffle in and out of different accommodations, so that was  cool. We were able to enjoy a lot of great entertainment on our day off and every day at dinner. “Project Foreigner,” an incredible Foreigner tribute  which features my good friend Dave Stremel crushing it on lead vocals, was great and of course our partner in crime Jasmine Cain every night was blistering as usual. American Hitmen from Salt Lake Utah is an all-original band that I highly recommend (I’ve played ’em on the radio show before, and I will again) – and a couple of other tribute bands (AC/DC and ZZ Top) were a lot of fun to watch and hang out with.

Reports say attendance was down, but I couldn’t tell it. Our Glencoe gigs on Monday and Wednesday had more people in the Pavilion than we had last year, and traffic seemed just as thick as in previous years. Behavior was pretty much the same as well – while there were some fist bumps and elbow bumps, I am happy to report the handshake is still alive and well among this cultural group. I personally did not go into any bars downtown, but I did hear reports of what many would consider “irresponsible” behavior – multiple people licking body shots off half naked waitresses in packed bars, stuff like that. One of our entourage witnessed a “Ball Sack War” – two guys whipped out their nuts (reports were that their sacks were stretched out like they’d done this before) and they were banging their ball sacks together which to me sounds disgusting AND painful. So just another typical week at the Sturgis Rally.

Soon you will see what I felt was the high point of the entire mission and one of the most important aspects of the engagement: the shooting of the new RKB music video for “Don’t Misunderstand Me” featuring Jasmine Cain! Since we had three gigs together, we got three takes from different angles and I can’t wait to show it to you and the rest of the world.

The entire experience was fantastic for all of us and we are very thankful to have become a part of the Sturgis Rally Experience these past few years. We saw friends from all over the country, friends from the Monsters Of Rock Cruise events and other shows, and we are very appreciative of the great crowd reactions and positive responses.

Of course there’s been some backlash due to people’s Covid-19 fear. I’m not going to get into that debate, but I’ll emphasize that the decision to play was (1) unanimous and (2) it had nothing to do with money. Yes, we got paid – it’s our job. But we did have to decrease our price because the venue owners were understandably apprehensive about how attendance was going to be, and if the Rally would even happen as planned. This was a celebration of our lifestyle and our music, of our way of life and our need to be free and express ourselves. #WildForever”