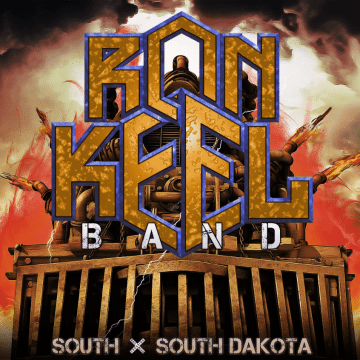 Ron Keel was asked about how the Ron Keel Band went about in assembling the repertoire, and arranging and recording the tracks on the upcoming new album, to which he replied:

“South X South Dakota is a totally unplanned organic accident – when we were in the studio recording last year’s Fight Like A Band album, we would start and end each session by jamming some of our all-time favorite southern rock classics. We’d loosen up with some Molly Hatchet in the morning, and wind down with some .38 Special at night; of course our producer Mike Dresch was recording the whole time, and when I listened back to this stuff I knew there was something special there.

Many of these songs are important pieces of American rock n roll history, songs I played in cover bands growing up, or songs I always wanted to sing. And often times when we play these big biker events like Sturgis or the Lone Star Rally or whatever, we’re playing for 20,000 people or more and many of them aren’t familiar with me or my history – so we weave in tributes to these iconic bands and give the audience our ten-minute medley of Skynyrd or Marshall Tucker Band and give them a taste of songs we all know and love.

Some of them like “Flirtin’ With Disaster” and “Rockin’ Into The Night” turned out to be pretty faithful to the originals – but there are some songs we Keelized and made our own, like “Fire On The Mountain” and our version of “Mamas Don’t Let Your Babies Grow Up To Be Cowboys.” I love the duet with Jasmine Cain on “Don’t Misunderstand Me,” from Rossington Collins Band…and the first single is my all-time favorite Skynyrd song “Red White & Blue,” not one of their vintage tunes but a song that really resonates in times like these.”

You can read the rest of the interview with Ron Keel by Thomas Amoriello Jr. at Boston Rock Radio‘s website. and you can pre-order South X South Dakota via HighVolMusic‘s website.