Keel and Ron Keel Band frontman Ron Keel continues to be busy putting out new music. The singer will be releasing a new acoustic album titled Alone At Last…Again and has communicated his intentions to make one track of the new album available each month to his Patreon members. 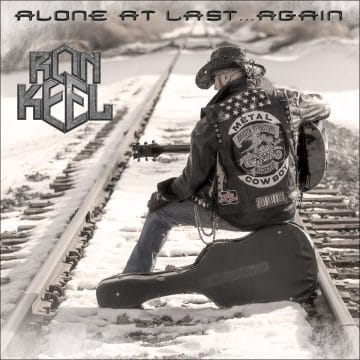 January 28th is the BEST day to release stuff. That’s why 10 years ago today we released “The Right To Rock: 25th Anniversary Edition” simultaneously with what I feel is our greatest album and accomplishment, “Streets Of Rock N Roll” on Frontiers Music srl. Thanks for all of the social media posts celebrating the 35th anniversary of the R2R release – we’ll celebrate next week on the Monsters of Rock Cruise. And you can bet your ass there will be several songs in the show from the 2010 album as well.

That’s also why today I am releasing the first song from “Alone At Last…Again” – my new solo acoustic album, available ONLY to All Access Members at http://patreon.com/ronkeel – I am releasing one song each month only on Patreon, and in December when the 12th song is released, the “All Access” Members ($6.99) will receive a complimentary signed CD.

And that’s also why I released my book “EVEN KEEL: Life On The Streets Of Rock & Roll” on January 28th 2014, simultaneously with the original “Metal Cowboy” album. Because January 28th is just the best day to release stuff.

Of course I don’t mention ANY of this on this week’s radio show, blasting from Baltimore today at 1 PM Eastern on 97Underground.Com / http://97underground.com – I was too focused on all the great new music from Black Swan Band, Revolution Saints, Black Star Riders, EMN (Every Mothers Nightmare), Dirty Shirley (featuring George Lynch), Abby K On Bass, PJ Farley Music and Airbourne.