With respect to the upcoming Keel World Project, Ron Keel revealed (as provided by the Tulsa Music Stream with slight edits): “I want to make history. I want to do something that really leaves a mark, and I think if it’s my last record, then it will be one hell of a statement from me about my entire 40 year career with new music from all those projects. So I’m excited to pursue 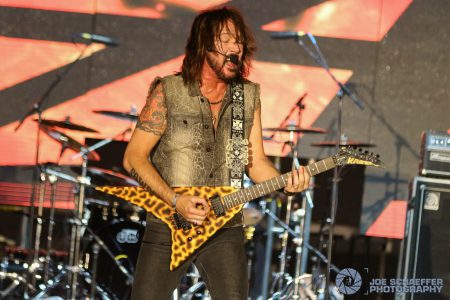 that. We’re going to get recording here in September and we’ll have new Steeler music, featuring Rik Fox, Mitch Perry on lead guitar for Steeler, all the guys in Keel are on board, Fair Game, my guys in Iron Horse, the Ron Keel Band will have a number of tracks…. A lot of great new songs from the Ron Keel Band on this Keel World Project . This [could] be a double album. It probably [will be a] triple [album]. You know it could be. I think it’s great songs [that] we end up with. I would like to make it as a special of a package as I possibly can and make it as, as big and as exciting as, as it deserves to be.”

In terms of Keel‘s album The Final Frontier (1986), Ron Keel stated: “[It’s] pretty much everybody’s favorite Keel album, and certainly our highest charting album in 1986, and also still that record testifies to my diversity you’ve got the metal of “Rock And Roll Animal” and “No Pain No Gain.” You’ve got the commercial rock of “Just Another Girl”, or “Because The Night”… You’ve got the classical piece “Nightfall” which leads into “No Pain No Gain” so it’s a very diverse album. And certainly, really proud that that particular release is a special part of so many fans of youth and upbringing the soundtrack of their lives and all that. It was a dream come true for me, because Gene [Simmons] believed in my vision at that time and let me kind of run free in the studio to create so many different styles of songs. “Here Today, Gone Tomorrow” which is my favorite shout out and thank you, and that this sounds like Bad Company, and they’ll play “[No Pain] No Gain” [which] started like it was metal. “Just Another Girl” was like Journey, or whatever. I mean it was a lot of different styles and textures on that record, which really was what I wanted to be in the first place. I wanted to take the audience and the listener on a ride on a journey. I want every song to have its own identity and to take you on this trip.”

You can listen to the interview with Ron Keel on the Tulsa Music Stream below:

Keel‘s “Because The Night” video (from The Final Frontier album):