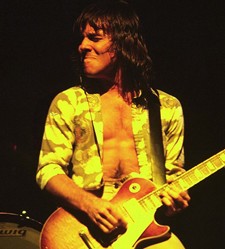 Guitarist Ronnie Montrose, who was found dead at his home in Brisbane last month, died from a self-inflected gunshot wound, the San Mateo County coroner said Friday. The autopsy also revealed his blood-alcohol level was at 0.31-percent when he died — nearly four times the legal limit in California.

The San Francisco Chronicle reports that Montrose, 64, was found in the living room of his home on March 3rd holding an unregistered .38-caliber revolver. He was pronounced dead at the scene. Fans had speculated about the cause of his death after a spokesman from the Brisbane Police Department said it was under investigation.

Montrose was diagnosed with prostate cancer in 2007, and his family initially led people to believe he had died from complications from the disease. But in 2009, the guitarist had announced it was in remission.

Shortly after the coroner’s report went public, a statement was posted to Montrose’s official website: “By now, the devastating truth of Ronnie’s death is public knowledge. We hope you can understand why we wanted to keep this news a private family matter for as long as possible. We can only hope that you will choose to celebrate Ronnie’s life, and what his music meant to you, rather than mourn his passing. Ronnie would have wanted it that way. He loved being a guitarist, a composer, a producer, and a creator of magic. He fully understood his gifts, and yet he constantly pushed himself to evolve, improve, and make better music. He did this for himself, and he did this for you, because he adored and appreciated his fans. Please keep his energy, his joy, and his love in your hearts.”

Leighsa Montrose said the guitarist suffered from lifelong clinical depression. “He was very hard on himself,” she said. “He would play shows where there would be three standing ovations, and all he would talk about on the drive home is what he didn’t do right.”

He didn’t leave a suicide note, she said. “He didn’t give any indication. When his mind is made up you can’t reason with him with logic. I guess he just let it get the better of him. He was tormented.”

Montrose, a San Francisco native, played with Van Morrison, Boz Scaggs and the Edgar Winter Group. But his greatest success came with his own band, Montrose, which he formed in 1973. The original lineup featured Sammy Hagar on vocals and released two rock classics, ‘Montrose’, and 1974’s ‘Paper Money’. He also formed the band Gamma.

“Ronnie was one of the originators of the hard rock riff and his joy of playing was evident in everything he did,” said Michael Molenda, editor in chief of Guitar Player magazine. “I’ll always treasure his beaming smile when he tore into a great riff.”

After his initial cancer diagnosis, Montrose took two years off to recover from surgery but spent his later years touring. He played close to 50 shows last year.

“He was full steam ahead,” Leighsa Montrose said. “I’m bewildered.”