Great news for fans of Aussie hard rockers Rose Tattoo as the band will be embarking on its first tour in over eight years. 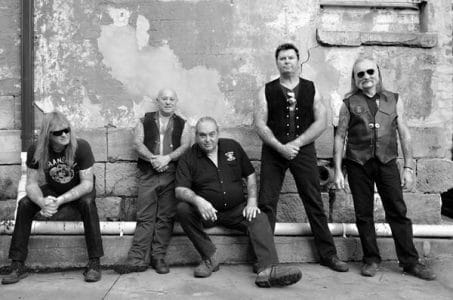 The following message was posted on Rose Tattoo‘s Facebook page on December 6, 2017:

“Rock N’ Roll outlaws, Rose Tattoo are proud to announce their Blood Brothers 2018 tour, the first in over eight years. Inspired by a special invitation to Bang Your Head Festival, Germany back in July of this year, the fans requests for ‘another tour’ and the ‘never say never again’ spirit, Angry has “assembled the finest bunch of rogues, worthy of wearing the colours” for this run.

Blood Brothers album was originally released in early 2007 to rave reviews such as “powerful, unrelenting and wildly uncompromising.” Rose Tattoo have been described as, “One of the most revered bands of all time. The Tatts play peerless, street-level, heavy blues with the emphasis on slide guitar and strident lyric statements” – Ian McFarlane Music Historian.

Rose Tattoo has been a classic rock institution for nearly forty years. The Blood Brothers 2018 Tour guarantees to deliver unadulterated, adrenalin fueled, dirty Aussie rock at its’ finest!! “You, the loyal supporters and, you the newly found friends, deserve nothing but the best and, that’s just what you will get! Be there or be square!” – Angry