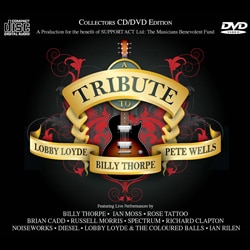 The legendary tribute shows for Pete Wells and Lobby Loyde are finally released on CD. The album also acts as a way to remember Billy Thorpe, who hosted both gigs in late 2006 and early 2007.

‘Tribute’ is released through MGM Distribution in Australia . The first three thousand copies will include a bonus DVD including performances by Billy Thorpe and Lobby Loyde. Purchase information can be found at www.bombora.net.au/tribute.

The word Tribute means a gift, testimonial or compliment given in acknowledgment of gratitude or esteem.This seemed a fitting title for the collaborative efforts of some of Australia’s finest musicians, in aid of their ailing friends – Pete Wells of Rose Tattoo and Melbourne’s Lobby Loyde. The music industry lost Pete and Lobby in 2006 and 2007 respectively.

As a generation of much loved musicians reach ages many of them never thought they would see, sadly illness and hard times fall on many of them. Billy Thorpe was acutely aware of this and his determination to do something was heightened during the happy months he spent among his mutually-aging comrades on the ‘Long Way to the Top’ tour of 2002.

In 2005 and 2006 these two shows were put together by Billy and underwritten by Chugg Entertainment. Countless artists and roadcrew gave their time and energy to raise funds for Pete Wells and Lobby Loyde, as directed through Support Act Ltd.

Support Act Limited (SAL) was formed as a registered charity in 1997 by a group of concerned music industry veterans, including Michael Chugg, Meryl Gross and Jim White (ex Festival Records) and Lindy Morrison (Drummer for The Go Betweens) who could see that there was a definite need for an organisation to assist members of the industry who were in need or suffering hardship. Billy Thorpe became a Director of Support Act shortly before his death in 2007 and in his memory, the Billy Thorpe Foundation has now been setup. It’s specific purpose is to carry out Billy’s dream of creating purpose built spaces within existing retirement homes for music industry veterans.

This recording will benefit Support Act and the families of Pete Wells, Billy Thorpe and Lobby Loyde. All the artists on the recording have given their time and their royalties to the cause. Various industry organizations pitched in to pay for the production of this project and they need to be applauded for doing so -they include Bombora Records, Metropolitan Groove Merchants, Chugg Entertainment, Andrew McManus Presents, Acer Arena and Brisbane Entertainment Centre, Bob King and Serge Thomann Photography and Mushroom Music.

New Support Act Director Brian Cadd comments: “The tracks on this wonderful, uplifting and ultimately celebratory album have come from two extraordinary works of love. The benefit for Lobby Loyde and the benefit for Pete Wells.For our old friend and much-missed giant of Australian Rock, Billy Thorpe, it was a love for these two rock magicians that drove him to put these two concerts together. It was also a practical way to help these legendary musicians in need. And that is what lies at the heart of what Support Act stands for.”

The idea that, in an industry where the most common form of superannuation may be an old guitar or two, there are ever increasing numbers of our brothers and sisters who have fallen on hard times and need our help.

Support Act is one of the beneficiaries of the royalties earned from the sale of this music. On behalf of all of those who have given so much to audiences over the years and now or in the future may need our help, I thank you from the bottom of my heart.”

Project Producer Amanda Pelman stated: “As manager of the Estate for Billy Thorpe, my day to day duties include maximizing Billy’s contribution to the Australian music industry now he is no longer here with us to do so. Some days it is a little like having a parrot on your shoulder – I can hear him saying ‘Put the Rilen track straight after Lobby – luv ya!’ Our relationship as friends and mutual Aries drove us in life and the beliefs and opinions he held so dear now drive me on after his death. He would have been extremely proud of this release, I know he was overwhelmed by everyone’s contributions. Now all he would say is ‘Go out and buy the fucking thing’.”

Michael Chugg, Billy’s long time friend and manager: “When Billy had an idea he didn’t let it rest until it happened. That was how it was for both the events he designed for Pete and Lobby. I was happy to underwrite both ventures in the spirit of solidarity that they were intended. On the afternoon of The Palace show, Billy was everywhere, doing everything, when he casually dropped the line ‘You’ll be doing one of these for me soon!’ Our grief is that he is sadly now included in this Tribute. Enjoy the energy in this music – the last performances from Lobby, Ian Rilen – and all too soon, from my mate Billy Thorpe.