After retiring the band Rough Cutt last year and forging ahead with the new group Rough Riot, guitarist Chris Hager and drummer Dave Alford decided to leave Rough Riot in 2019 and continue under the band name Rough Cutt with some new 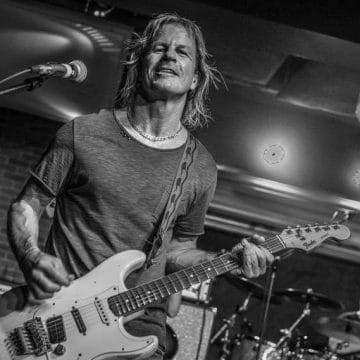 band members. Previously, Hager had announced that the new lead vocalist would be Steven St. James while the bassist would be Jeff Buehner. Hager has now announced the fifth member of the group.

Last month, Sleaze Roxx interviewed Hager, Alford and St. James about Rough Cutt‘s rebirth. At that point, the group hadn’t yet finalized who would be accompanying Hager on guitar. Alford stated at that point: “So we tried doing things the old singer’s way [Paul Shortino’s way] and that just didn’t work out. I think this time around, we have the band’s fifth line-up, but I have to say that I feel this is the most solid line-up we’ve had. We’re doing different things on the new songs. We’re experimenting. It will be different but it’s still Rough Cutt. I don’t have to tell you, but as you know, the first record was completely different from the second record. Our third, which we are currently working on, will be different from the previous two records. Bringing in Steven St. James to take over for Paul [Shortino] has been a huge plus, because we’re already gelling vocally. We’re still looking for a second guitarist, because as you know, Rough Cutt has always been known for having a very strong guitar core.”