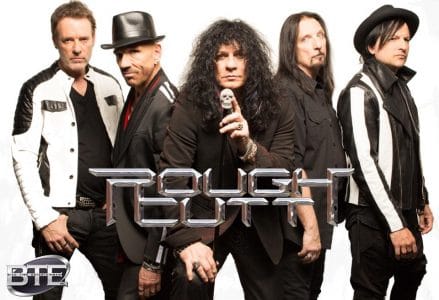 “Feels great playing with my Rough Cutt band mates, the original line up with Warner Bro’s. We had many magic moments! This is going to Rock! We asked the fans what you wanted to hear & that’s what we’re doing! ‪#‎BIGLove‬ ‪#‎DreaminAgain‬ ‪#‎BlackWidow‬ ‪#‎CuttyourHeartout‬
??✌?️??? ‪#‎MORC2016‬”

Rough Cutt are scheduled to play the Monsters Of Rock Pre-Cruise Party at Avalon Hollywood in Los Angeles, California, USA on September 30, 2016.

Sleaze Roxx stated the following in its recent review of Rough Cutt‘s self-titled debut album, which was reissued by Rock Candy Records: “Rough Cutt in its formative years had more in common with ‘metal’ bands than bands like Ratt, Mötley Crüe, or the like. Songs like “Take Her,” “Black Widow,” “Dreamin’ Again” and the bordering on thrash metal track ‘Cutt You Heart Out” is proof of that. In addition to the aforementioned originals, the album also featured a blistering cover of the Erma Franklin track made famous by Janis Joplin “Piece of My Heart.” The slower, sludgy tempo, crushing riff along with Paul Shortino’s soulful vocal is near perfection. The dual guitar attack of the young gunslinger Amir Derakh and the seasoned Chris Hagar made for ‘eargasmic’ listen experience throughout the album.”