Another seemingly forgotten band from the late ’80s / early ’90s has been unearthed by the DDR Music Group as Rough Justice‘s recordings are seeing the light of day through the recent release of their self-titled album. 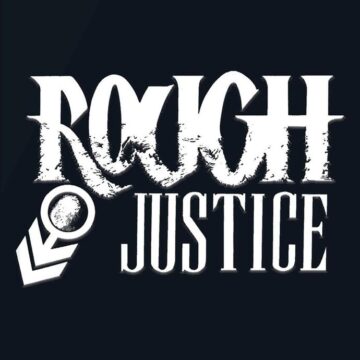 “Who wants some Justice?

The DDR Music Group is proud to have teamed up the guys in Rough Justice to finally release the Hollywood bad boys’ epic recordings for the first time ever!

Formed in 1989 in the heart of Tinsletown by bassist Stacey Grave & guitarist AJ Mitchell, they would eventually find their musical soul mates in lead vocalist Vandall and drummer Randy Allen which would start the clock on their assault of Hollywood officially taking the stage at the Troubadour in 1990.

If you were lucky enough to be here in L.A. at the time and saw Rough Justice perform you certainly would not forget their twisted Los Angeles stage show complete with prison bars and siren lights, every show was masterful in its own right!

Rough Justice were gritty, encompassing the real life side of Hollywood and the dangers that lurked around every corner, sinking their writing chops  into more meaningful content with the brazen ass kicking tracks “Suicide Johnny”, “Good Ol’ Days”, “Cheap Disguise” and “Dance Like Fire”…the boys brought some serious thunder and backed it up at every turn.

The songs burst open at the seams as world famous DJ Rodney Bingenheimer found out when he spun them on the L.A.’s KROQ and instantly deemed them “The New Sweet”.

Unfortunately with all things 80’s Metal, things came to end for Rough Justice in 1993 after a three year barrage on the Sunset Strip that  will not be forgotten by many and with this CD release, DDR is making sure that legacy is never forgotten.

On August 8th, 2001, we all mourned the loss and death of lead vocalist Randy Vandall and thirteen years later, a sold out Viper Room got to see the remaining members pay tribute to Randy and the greatness of Rough Justice by having singers from Legs Up, Bad Blood, Wikked Gypsy, Black Cherry and Hardly Dangerous step up to the mic and deliver an unforgettable show in which two tracks from that night are included on this album release.

Rough Justice left their mark on Hollywood and all that was is included on this disc which is digitally remastered from what recordings were left and is packaged in an 8 page booklet.

This CD is officially licensed from the band and is exclusively available @ The DDR Music Group.”