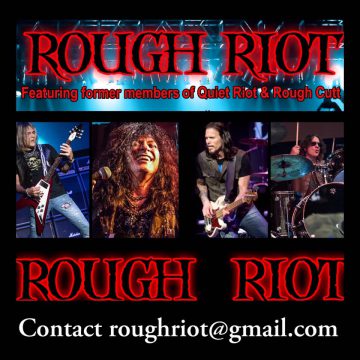 The following message was posted on the Facebook page of Carlos Cavazo’s Rough Riot yesterday (with slight edits):

“Rough Riot would like to thank everyone for their patience and understanding for our recent silence and cancellation of shows.

We are working on new music and have new shows booked….

Joining us for those shows we welcome Drummer, Greg D’Angelo [of ex-] White Lion.

We will update as soon as possible.

We are looking forward to a fresh start with this new Lineup!

We would sincerely like to wish Chris and Dave all the best on their new project….. Stay tuned, 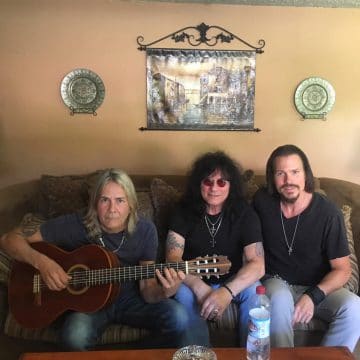 Of note, Cavazo was the last member to join Rough Riot and initially, it appears that Cavazo was joining Rough Cutt before the band decided to change its name to Rough Riot. In an interview with Sleaze Roxx contributor Ruben Mosqueda in December 2018, Hager advised:

“Amir [Derakh] has been working on Julien-K, which has been his baby for the past 13 years. Great band. I love all those guys. When the opportunity came up to put Rough Cutt back together, the offer was great, so I was like “Yeah, this will be fun and we’ll make a little money.” Amir was into it and it was a lot of work to go back and relearn some of that stuff. We used a lot of effects back in the day, a lot of double leads and stuff like that. So we did the Monsters of Rock [Cruise] and then did some other shows. We got an agent to see where that would go. We did wind up doing a half dozen shows or so. We wound up hooking back up with our former manager Wendy Dio. That was really cool because it was like we were back home again. Once Wendy came on board, things began to happen. Amir’s band was offered a couple of different tours. That was a priority for him, so he wanted to do that. Matt [Thorr] didn’t want to do it anymore, so we thought we could get some subs. That way Rough Cutt could be playing, because once you begin to build a little momentum, you’ve got to keep going. That left us in a position where we weren’t sure what we were going to do next.

We started off looking for another guitarist and bassist, so we made some calls. We definitely had some interest. Sean [McNabb] really was into being a part of Rough Cutt. He’s a fantastic musician and not to mention that we’ve been friends with him forever. So then it was just a matter of finding another guitar player. We got a lot of interest from some great guitarists, but they wanted to do a few shows with us and wouldn’t commit. So one day I asked Sean, “Hey, what is Carlos [Cavazo] doing?” We knew he wasn’t in Ratt anymore. We got into touch with Carlos and within a week he said, “Yeah, I’m into this.” Once we got Sean and Carlos on board, Paul Shortino said, “Let’s not call this Rough Cutt, let’s call this something else.” He was all about starting off fresh, so that is how this all evolved. So Rough Riot came up as a name. At first we were like, “Ugh, I don’t know.” After a while, it grew on us a little bit and it was like, “Why not?” It does represent what the band is, which is members of Rough Cutt and Quiet Riot. I think the fact that Paul and Sean made a record with Frankie [Banali] and Carlos in the ’80s, it kind of made sense.”