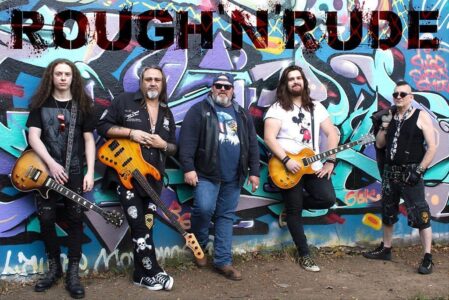 Speaking exclusively to Sleaze Roxx, Chadwick explained how the band got started. “Well, I was most of my life playing music since the day my Dad got me hooked on Johnny Cash. Then I found my true way when I heard Jimi Hendrix, Led Zeppelin and then Van Halen came out and bit me in the ass and that was it… Growing up in Orlando, Florida, I came back to Stuttgart Germany where I started in the late ’80s. Well as life goes on, I got married and had two beautiful boys. After my divorce and raising my boys on my own, I felt there was something deep missing so I just got some musicians together that fit together like brothers and we recorded my songs with my style and my feelings and the other people started to like it. It took awhile to find the right band members because I knew it isn’t just a band, it’s a band of brothers… These guys in Rough’N’Rude now are brothers and this strong formation is only one year old and we are going strong.”

In terms of how the band name Rough’N’Rude came about, Chadwick explained: “That’s a funny story. I was in a rock club getting shitfaced. I met this hot redhead, she took me home and we started to play patty cake. In the middle of our game, she moaned, ‘Oh God, I love it! You are so Rough’N’Rude.’ [laughs]”

With respect to when we can expect an album from Rough’N’Rude, Chadwick advised: “We are getting ready to shoot a new music video and I hope by the end of February with the the new song “Road To Thunder.” So the people and fans will have something good to watch over this Corona time and after the video, we will be recording our full album.”