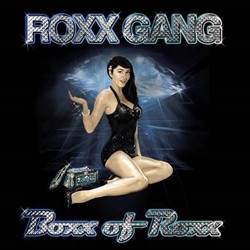 ‘Boxx Of Roxx’ covers the whole Roxx Gang history from the first recordings with guitarist Eric Carell, who died in a mysterious accident, to demos from the band’s last recording sessions. All of the bands videos are included on the FnA Records release for the first time including a performance of Red Rose from an early club gig. The three disc box set also contains a fifteen page booklet of never before relesed photos from Kevin Steele’s personal archive, liner notes from Kevin and a foreword from legendary UK author and music journalist Malcolm Dome (Kerrang!, Record Mirror). The collection is available for purchase and preview at www.fnarecords.net.

Roxx Gang were easily the most underrated and misunderstood band of the late 80’s and early 90’s. If ever there was a band that should have attained superstardom it was Roxx Gang, Virgin Record’s first American hard rock signing. Unfairly lumped in with the whole hair band scene, Roxx Gang truly had the makings to become one of America’s greatest rock ‘n’ roll bands. And for one glorious moment… they were.

Their cult classic first album ‘Things You’ve Never Done Before’ was a rock ‘n’ roll tour de force that had about as much in common with the L.A. hair wimps as a hungry shark does to a bowl of goldfish. Their incendiary live shows are still talked about today by those lucky enough to have witnessed them. Now FnA Records proudly presents a tribute to this phenomenal band with the three disc set ‘Boxx Of Roxx’. Disc 1 is all rare and previously unreleased gems spanning the bands history from it’s earliest studio recordings to it’s fiery demise. Disc 2 is a never before heard bootleg of Roxx Gang live in Dallas, Texas from the ‘Things You’ve Never Done Before’ US tour. Finally, Disc 3 contains all of Roxx Gang’s video output from the MTV favorites “No Easy Way Out” and “Scratch My Back” to the uncensored, rated X “Startrip” video. This release stands as a testament to the raw power and visual splendor of one of America ‘s true unsung greats… Roxx Gang!

Roxx Gang exploded on the national music scene in 1988 as a hybrid mixture of rock, blues and punk that virtually defied classification. Their demo album ‘Love ‘Em and Leave ‘Em’ earned stellar reviews on both sides of the Atlantic, out selling Guns N’ Roses and Whitesnake (the biggest bands of the day) in their hometown, and earned Roxx Gang a spot on the Top Ten Heavy Metal Albums Of The Year in Tower Records’ Pulse! Magazine. In a short space of time the Gang did a series of major label showcase gigs, garnered a huge international following, and were signed to Virgin Records. Their Virgin CD, ‘Things You’ve Never Done Before’, was released to great critical acclaim and coverage in the international rock and music press was extensive. The bands videos received airplay on MTV, they toured all over the world and ‘Things You’ve Never Done Before’ went on to sell over 250,000 units.