Big news for Fear Not fans as Roxx Records will be releasing a limited edition reissue of the ’90s group’s debut album.

“Roxx Records is very excited to announce our next Limited Edition reissue of the much sought after debut release from US rockers FEAR NOT! 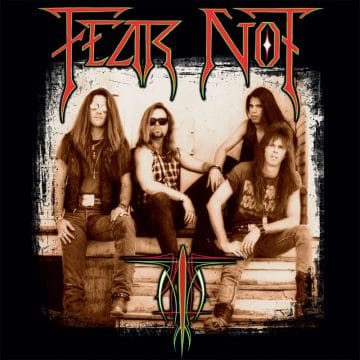 That’s right one of the long, lost out of print titles that has never seen a proper reissue, original CD copies are very scarce to find these days, if you can find one at all! But even better this will be the first time this title has ever been released on vinyl!

Fear Not was formed in 1992 coming out of the remnants of Love Life with their one and only release entitled ‘Goodbye Lady Jane’. After the release of ‘Goodbye Lady Jane’ the band felt they needed a change and to somewhat reinvent their sound and style, the band would change their name to Fear Not, sign on to Pakaderm Records and embark on to a very successful ride with this, their self-titled debut.

Unfortunately in the mid 90’s the music scene was starting to take a turn, and when a band like Fear Not should have been on top of the charts, the sounds of grunge were coming in and hard rock in the vein of Fear Not was pushed to the side. Alas, Fear Not would call it a day before ever recording a sophomore release.

Today 25 years later we are excited to once again revisit and celebrate the music and story of Fear Not. Featuring a very beautiful new cover, that stays true to the original release while highlighting the hand painting of Ronald Wall, who assisted in the beautiful pin stripped logos on the cover and the beautiful updated hand painting of the cross on the back cover. Together with Scott Waters (No Life til Metal), they turned the artwork and layout in to a work of art.

We are just getting started though, the music for this reissue has been completely remastered for vinyl and for a special CD pressing by our very own Rob Colwell (Bombworks Sound). So join us as we celebrate the 25th anniversary of Fear Not with this very cool limited edition reissue.

Fear Not the self-titled album will be issued on vinyl for the very first time with a special run of only 500 copies, featuring 150 copies on purple vinyl and 350 on black vinyl. It will feature all 10 of the original tracks as they originally appeared on the CD. Also we will be pressing 500 copies on limited edition CD featuring all 10 original tracks and 2 brand new previously unreleased tracks on CD! Release date is scheduled for December 8, 2017, just in time for the Holiday season. Stay tuned for updates and pre-order information by signing up on our email list at www.roxxproductions.com”

Fear Not performing “Give It Up” at Cornerstone Festival 1993:

Fear Not Give it Up ‘Live’