Quiet Riot bassist Rudy Sarzo and guitarist Alex Grossi were recently interviewed by Richard Bienstock for Metal Edge Mag. Bienstock along with Tom Beaujour are the authors of the well received book Nothin’ But A Good Time, which was released back in March 2021. 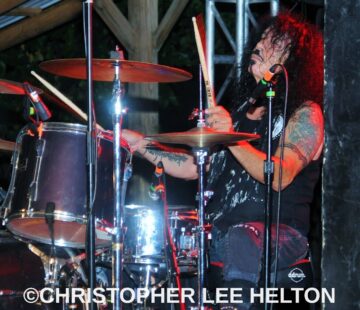 Sarzo returned to Quiet Riot a few months ago after an 18 year absence but he is now in the band without his previously long-time bandmate and drummer Frankie Banali who passed away back on August 20, 2020, after a hard fought battle with pancreatic cancer.

Sarzo and Grossi were asked what comes to mind when they think of Banali. Grossi stated: “To me, he was more than just the drummer of the band and the boss. He was a mentor. When I met Frankie, I was 25 years old and I didn’t know how it all really worked – I just knew what I saw on Behind the Music and whatnot. But with Frankie, it was like, “Oh, you can be the guy onstage and also take care of your business offstage.” He was like a father figure, too, because when you’re out in L.A. by yourself and your family’s 3,000 miles away, he’s the guy who’s looking out for you and always making sure everything is handled. There’s not too many people like that out there.

I’ll always remember one of my first big shows with Quiet Riot – it was in Barcelona opening for Megadeth, and it was 15,000 people and everyone was going nuts. So after the show, everyone’s backstage and high-fiving… and Frankie‘s just giving me this look. I look at him and he goes, “Listen, I’m not a dog catcher. Pull it back.” That’s all he said to me. [laughs] I’m like, “Okay…” I didn’t understand at first, but now I get it. As guitar players, we naturally tend to play on top of the beat. But he wanted me to relax and find the groove. And he was the first drummer that brought that to my attention. Playing with Frankie, it was almost like bootcamp the first couple of years.”

Sarzo indicated: “When I think of Frankie, I think of family. I met Frankie in 1972 and we started playing together immediately. He was the first musician that I got to play with outside of the Cuban music scene. Frankie exposed me to so much music. He used to work at a record store, so he had a massive of collection of records, and it was diverse – jazz, prog rock, all that stuff. He turned me onto all of it. And he’s also the drummer who taught me how to be a part of the rhythm section, and how to play as a unit. And whoever I’ve played with throughout my career, I’ve brought a lot of what I learned from Frankie with me. He has been my family for 50 years. So when I think about it, I think of this tour as not only a 40-year celebration of Metal Health, but also, for me, it’s a 50-year celebration of my friendship and my musical brotherhood with Frankie Banali.”

You can read the rest of the interview with Rudy Sarzo and Alex Grossi at Metal Edge Mag.