Sarzo first joined Quiet Riot in 1978 after the band had released the album Quiet Riot (1977) and recorded the subsequent follow up record Quiet Riot II, which was released in December 1978. Quiet Riot‘s line-up prior to Sarzo joining the band 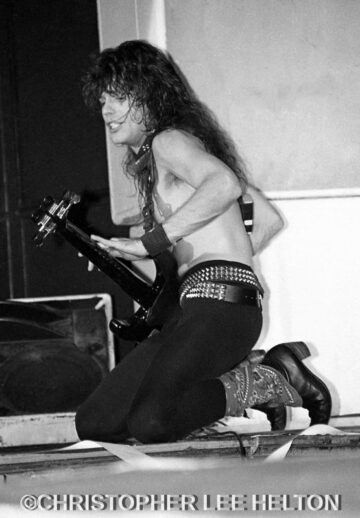 consisted of lead vocalist Kevin DuBrow, guitarist Randy Rhoads, bassist Kelli Garni and drummer Drew Forsyth. Sarzo ended up being pictured on Quiet Riot II but Garni is the bassist who played on the group’s first two albums, which were only released in Japan.

Wikipedia states the following about Quiet Riot reforming in 1982 (with slight edits): “In early 1982, having recruited drummer Frankie Banali, bassist Chuck Wright, and guitarist Carlos Cavazo, DuBrow contacted Rhoads to ask if he had any objections to him reviving the name Quiet Riot for his new band. Rhoads gave him his blessing but said he wanted to check with Rudy Sarzo first. Sarzo had no objections, and Quiet Riot was thus reborn after a two-year hiatus. Rhoads died in a plane crash while on tour with Osbourne in March 1982, and Sarzo subsequently left Osbourne‘s band a few months later, having a difficult time coping with the grief of losing his close friend and bandmate. The reformed Quiet Riot was recording a new song called “Thunderbird” as a tribute to Rhoads, and DuBrow called Sarzo to ask if he’d like to participate in the recording. The lineup of DuBrow, Sarzo, Cavazo, and Banali had so much fun recording the track that they wound up recording more than half of the new album in the process. Bassist Wright had already been briefly replaced by Gary Van Dyke (Hollywood Stars, Virgin), but the arrangement wasn’t working out and Sarzo was subsequently welcomed back to Quiet Riot as a full time member.”

“When you say almost original member? That would be like saying Frankie Banali is not an original member of Quiet Riot. Let me give you my perception because everybody has a perception. This is the way I look at it. There were two albums that were released only in Japan. It was basically kind of like releasing an independent EP. Forty five years ago when those records were released, the Randy Rhoads version of Quiet Riot, Billboard magazine, they didn’t even have a chart for that. Nothing for imports or music that was released in Japan. If you don’t have a record deal in the USA, you got nothing, you are not a recording artist. Today it’s a whole different scenario because Japan has their own domestic heavy metal bands with world class musicians. It is not the same scenario as it was 40 years ago. So technically, the clock starts with Metal Health because that’s when a band under the name Quiet Riot got signed to Pasha/Columbia Records. I got a contract that I signed along with Carlos and Kevin and Frankie, that disputes the fact that I am not an original member. Then again that is my perception.”

You can listen to the interview with Rudy Sarzo with The Metal Voice below: