Sarzo was asked to compare Quiet Riot‘s performance at the US Festival in San Bernardino, California, USA back on May 29, 1983 and Whitesnake‘s Donington Festival gig back in 1990. The bassist indicated (as transcribed from Portuguese to English by Marcelo Vieira Music): 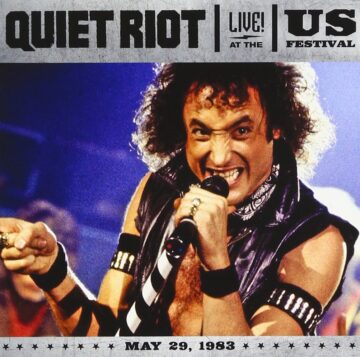 “Two very different moments, but both unforgettable. Donington was kind of a farewell, because we knew the band was going to split up at the end of the tour. It was a great show, but with a slightly bitter taste. With Quiet Riot, it was the beginning. Playing at an event like the US Festival would not be a guaranteed success; we just did a show for a lot of people who had come to see Van Halen [laughs]. We were added [to the line-up] two days before the show. We played at noon. There was no planning or big ideas like “let’s do this or that”. “Okay, do you want to do the show? It’s two days from now. Okay, buy the tickets, fly there, do the show and then get out.” And that’s what we did, because we had a show in another city the next day. So there was no celebration, no party, or anything; it was just a great show that we were left thinking about: “Wow! Did we really play for so many people like that? ” [Laughs]. Everything passed in the blink of an eye!”

You can read the interview with Rudy Sarzo in Portuguese at Marcelo Vieira Music’s website.

Sleaze Roxx stated the following in its review of Quiet Riot‘s album Live At The US Festival 1983: “Quiet Riot‘s Live At The US Festival 1983 is a real treat, showcasing some of the band’s best songs. Opening with the track “Danger Zone” (which never made it onto the Metal Health album until added as a bonus track when it was re-released), the band then only played songs from their original Metal Health release including “Run For Cover”, “Love’s A Bitch” and “Let’s Get Crazy”. While some may wonder why Quiet Riot‘s “Cum On Feel The Noize” was played in the middle of their set, that song had yet to be released as a single when the band played the US Festival on May 29, 1983.

The real gem of Live At The US Festival 1983 is the inclusion of the DVD which shows the band playing during the day to a massive crowd. Obviously, you need to get past the terrible outfits that include lead vocalist Kevin DuBrow‘s mostly red outfit complete with suspenders — his terrible hair is another obstacle. However, the DVD confirms that the band had a good live presence — mainly due to Kevin DuBrow.”