Less than a week ago, it was announced that Quiet Riot was going to continue even though band leader and long-time drummer Frankie Banali passed away a couple of weeks ago. The Quiet Riot line-up now consists of bassist Chuck Wright, guitarist Alex Grossi, lead vocalist Jizzy Pearl and drummer Johnny Kelly. Some have wondered whether Quiet Riot should continue without at least one classic line-up member given that bassist Rudy Sarzo and guitarist Carlos Cavazo are still alive and played on the band’s biggest albums including Metal Health (1983) and Condition Critical (1984).

Sarzo, who has been very close to Banali over the years, posted the following message on his Facebook account three days ago in support of the latest Quiet Riot incarnation (and after a message posted by Grossi):

“I fully support and applaud all incarnations of Quiet Riot and my brothers who keep the flame of it’s legacy shining bright.

Grossi‘s Facebook message three days ago was as follows:

“So great to see the outpouring of support from all over the world with regard to QUIET RIOT‘s anouncement to continue.

Since meeting Kevin Dubrow, Frankie Banali and Chuck Wright when I joined the band in 2004, I have experienced both the amazingly great and the horribly tragic. No matter what, we always forged ahead.

While I am still devastated from the loss of one of the most important people in my life, I take comfort in knowing that Frankie Banali‘s legacy could not be in better hands and will carry on as he wanted.

Whether you like it or not – QUIET RIOT isn’t going anywhere.

Neither is the rock n’ roll spirit that Kevin Dubrow, Randy Rhoads and Frankie Banali embodied.

Looking forward to seeing you out on the road soon…!” 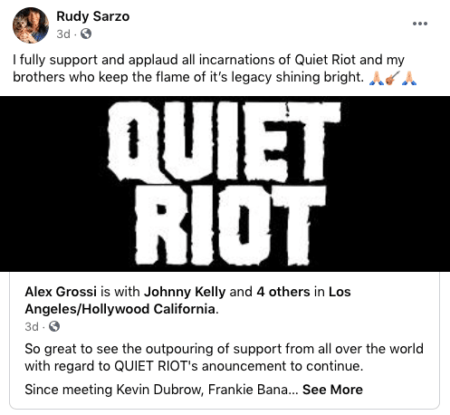