Canadian glam hard rockers Rusted are back with a video for their new song “Hittin’ The Road.” 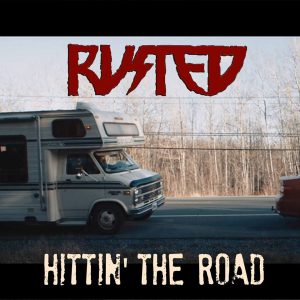 Sleaze Roxx caught up with Rusted‘s frontman Tony Rust to find out what the band has been up to given that the group has been relatively quiet in the last year. Rust replied: “You’re totaly right on that. Our last release was Restless Gypsies last year. The thing here is that we were so busy touring and playing shows that all of our time and energy was spent on that. We also spent lots of time mixing and mastering our live album, which is about to be released this fall! But don’t worry, we are also working on killer new songs to be recorded for our next studio album!”

With respect to when we can expect a new studio EP or album from Rusted, Rust stated: “For our next EP or album, you will have to wait ’til 2017 for sure! We have lots of materials to work on now, but we really want our next album to be the next big thing for us, so we will take the time needed to present to our fans the best album we can make!”

Finally, Sleaze Roxx noted that the song “Hittin’ The Road” seems heavier than the prior Rusted material. Rust responded: “I cannot disagree with that [laughs]. But if you want the absolute truth, it’s really not intentional. When it comes to creating new songs, we just go with the flow and see where it’s going to lead us. We are fans of so many differents heavy metal bands. That’s why sometimes we can put out a song that reminds people more of Bon Jovi and the next time, it’s more influenced by Iron Maiden! But if you want to know, the next album will still have ballads and heavy songs! Its gonna be a rock album!”

Sleaze Roxx stated the following in its review of Rusted‘s Restless Gypsies: “Bucking the trends and forging your own path can sometimes be the key to success. One band that is creating its own path is Montreal, Quebec based Rusted. Not only is the group working on releasing its first live record after having only released one full length record, 2013’s Rock Patrol, and a debut EP, 2010’s Hit By, Rusted have just released Restless Gypsies, which is a collection of acoustic versions of six of their original songs along with three new tracks. With Maniak, one of their guitarists, still based in France while the rest of the group remains in Canada, Rusted have just come back from their first European tour. Clearly, this is a band that does things differently.

Releasing acoustic versions of hard rock songs is always a risk because it puts extra emphasis on the lead singer’s vocal abilities and songs as a whole. In Rusted’s case, this is a good thing because lead vocalist Tony Rust more than lives up to the challenge with his singing and some of the songs really come alive in their stripped down acoustic format. The one that really comes to mind is “Wanted Man Boogie”. I must confess that I was really hoping that Rusted would tackle that track on Restless Gypsies when I heard that they would be releasing acoustic versions of some of their past original songs because the song has so much potential. From the infectious boogie feel to the awesome stripped down guitar solo, ‘Wanted Man Boogie” is the best track on Restless Gypsies.”