Canadian glam metal rockers, Rusted, have released a video (see below) of their cover of the John Lennon song “Imagine” as a tribute to victims of terrorism around the world and in response to what occurred in Paris, France back on November 13, 2015. 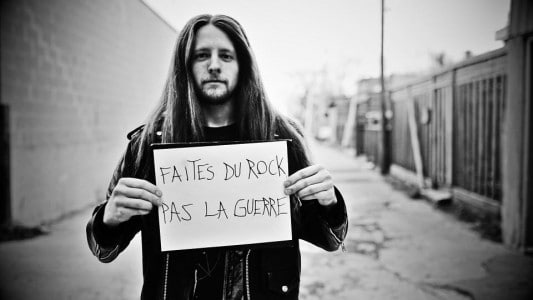 Speaking exclusively to Sleaze Roxx, Rusted‘s frontman Tony Rust commented on why the band decided to tackle such a serious subject and stray from their party and fun glam metal image with a political message: “We are a party band, and we are not going to change that in the future, but I think sometimes, it’s a good thing to be serious when something like the terrorist attacks in Paris happens. I think music is the strongest weapon for us, and the only way we can send to our fans and friends all around the world a positive message in these darkest days.”

Rust also advised why Rusted chose to cover the song “Imagine”: “First of all, we chose to cover “Imagine” by John Lennon because of the strong positive message of the song. Having a French guy in the band and having toured Europe including France in the past year, it was a sure thing that we knew someone involved in the tragic incidents of Paris. So when we learned that some of our friends had been shot, we were really shocked and we really tried to think about how we could let their family and friends know that we are behind them and we support them. We thought about writing a new song about it but as you pointed out, we are usually a party/rock band which is trying not to be that involved politically so the idea of covering John Lennon‘s “Imagine” came up to us. After 45 years, I don’t think someone has written a better positive message of peace than Lennon did!”

We dedicate this song to all the victims of terrorism around the world. Peace, love and Rock’n’Roll.Download the song for free at : https://rustedrock.bandca…

In other news, Rust recently joined Alice Cooper guitarist Nita Strauss at a guitar clinic in Montreal, Quebec, Canada and the pair played their rendition of Alice Cooper‘s classic “Poison” (see video below).

Nita Strauss inviting Tony to sing “Poison” with her during her guitar clinic In Montreal.