Canadian rockers Rusted featuring Tony Rust (who was a contestant last year on the TV show La Voix, which is the equivalent of The Voice), guitarist ManiaK and Tommy D. Eagle, bassist Mark Shark and drummer D.Izzy are working on their follow up studio album to Rock Patrol (2013). 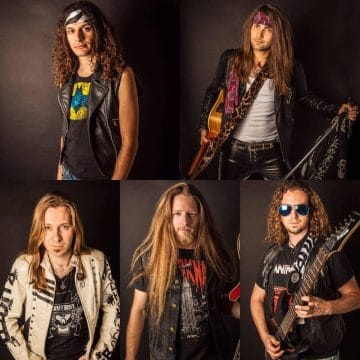 Speaking exclusively to Sleaze Roxx, singer Tony Rust provided an update on the band’s new studio album as he stated: “For now, we don’t want to give ourselves a deadline. We really want this next album to be the best thing Rusted ever did. We think it’s gonna be finished this year for sure and maybe released this fall. For now we have a lots of songs in preproduction and we want to take the time to evaluate and choose wisely which songs have the best potential to be featured on the album. We are thinking about a maximum of 12 to 13 songs to make the final cut.”

A new single is apparently in the works beforehand as Rust advised: “We are also focusing on a single right now to be finished and released before the whole album will be done. Maybe it will be released this spring if everything goes well!”

Rusted also have the opportunity to open for Bon Jovi at the Bell Centre in Montreal, Quebec, Canada on April 4-5, 2018 and they need you to vote for them to help them land the coveted opening slot.

ATTENTION ROCK PATROLLERS!!! We need your help! Please click on this link and vote for us to give us the chance to open for Bon Jovi in Montreal in April! Help us make this dream come true! We know that we have the best fans in the world! Thanks for your neverending support!”