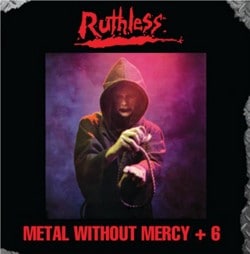 Dedication, honesty, and staying true to metal is what it is all about as Ruthless embark on their 30th year in heavy metal music. Having released one of the classic underground cult metal albums of all time, ‘Metal Without Mercy’, Ruthless prepare for a new chapter in their fist-pumping career. On the cusp of going into the studio to record a new 2012-2013 album, FnA Records is re-releasing ‘Metal Without Mercy’, the classic metal album remastered with six bonus tracks.

Ruthless recently signed to FnA Records — www.fnarecords.net — who prodded the band to go way back into the vaults to see what might be lying around. With a swift blow of the dust and the removal of a few cobwebs, there they were in all their glory, the very first 4 tracks that the band ever recorded (prior to the recording of ‘Metal Without Mercy’). Lead guitarist Kenny McGee crossed his fingers as he went into the studio hoping to salvage whatever might exist on these master reels, and successful he was. What resulted is sure to be a treasure, not only to die-heard Ruthless fans, but to metal fans the world over. FnA Records proudly releases, ‘Metal Without Mercy + 6’, the original 1984 ‘Metal Without Mercy’ album remastered, plus the very first four tracks the band ever recorded (“Losing Control”, “Flaming Eyes”, “The Executioner”, “Fear Of Evil”), plus two tracks that were recorded in 1988 (“White Death” amd “Winds Of War”).

Having been heavily influenced by bands like Judas Priest, Accept, and Black Sabbath, Ruthless formed in 1982. They started working on original music and playing out all around Southern California. As their popularity grew, radio airplay followed. Then came the rowdy metal shows where they shared the stage with bands like Slayer, Lizzy Borden, Great White, Stryper, Warlock and Leatherwolf. To this very day, the core muscle of the band remains as true as it ever was with lead singer Sammy DeJohn, lead guitarist Kenny McGee, and bassist Mark McGee. The current line-up is rounded out with Bob Guitrau on drums and Dave Watson on guitars.

In addition to having recorded and released the classic ‘Metal Without Mercy’ album, Ruthless also had a well-received 1986 release with ‘Discipline Of Steel’. Later the band would record two tracks at Final Vinyl in Los Angeles (1988). A grueling touring schedule followed and in 1990, the band took a hiatus. But you just can’t keep a good thing chained down!

Here it is thirty years later and Ruthless still find themselves to be a viable and in demand band. Year after year, the band is asked to be a part of one festival or another over in Europe. This continuously evolving interest has the band performing on a regular basis, and writing new music for a future release. Revel in the power and the glory once again… they’re back!